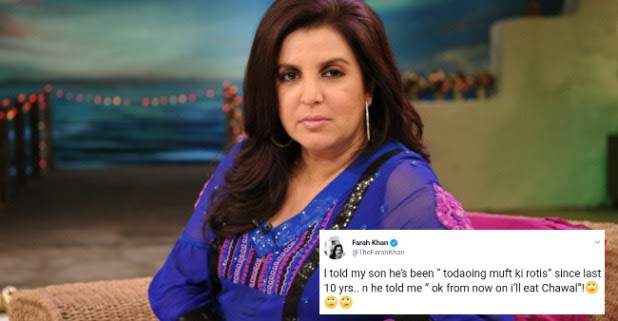 Farah Khan, the Indian Dancer, Choreographer, Director and also a Producer is a very popular face and name in the Indian Cinema. The 54-year-old lady is smart enough to make us laugh. Her Om Shanti Om is still appreciated as one of her finest work ever.

Farah is blessed with 3 children and recently shared a tweet on which is making us go ROFL.

Just a few hours ago, the multitalented lady took to her twitter handle and wrote a tweet which is making rounds on internet and Tweeple have started a shower of tweets on the same. Her caption reads as,  “I told my son he’s been “todaoing muft ki rotis” since last 10 yrs.. n he told me  ok from now on I’ll eat Chawal”

After her tweet, the Twitteratis just can’t control themselves in downpouring their thoughts on the same. Take a review on the Tweets…

One of the Twitter users wrote, ” Lol, he has a sense of humor. Lol”

Though it was good joke at least fr me

While another user wrote, ” Though it was a good joke at least for me”

And gets another 10 years

I try to tell her the same for muft ka pizza, but her reaction https://t.co/sqEq1cUc7U

On the work front, Farah choreographed the famous Zingaat song of Dhadak movie and also in Veere Di Wedding. Well, we can’t stop with a burst of big laughter and are compelled to call it the best tweet of the week undoubtedly…