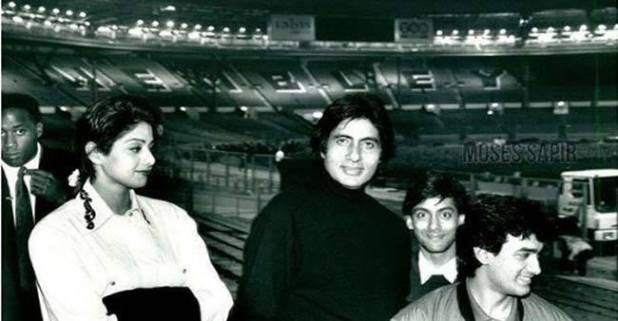 Amitabh Bachchan, the Big-B of Indian Cinema is quite active on social media platforms like Twitter and Instagram and usually interacts with the users and fans. With 11.4 million followers and 365 posts, the legendary actor has grabbed the attention of many people.

Recently a Twitter user shared a rarest of the rare old picture as a throwback from a concert at London and captioned the picture as, “Rare pic – Amitabh Bachchan with Sridevi Ji, Aamir Khan and Salman Khan During rehearsals for ‘Jhumma Chumma’ concert in London-Wembley Stadium 70,000 audience .. Sr.Bachchan.”

those were the days .. never before a concert at Wembley Stadium from India .. and on my insistence took Salman and Aamir for their first one .. https://t.co/YBoAKNP6Ht

The 76 years old actor took to his Twitter handle and retweeted to his post, “those were the days .. never before a concert at Wembley Stadium from India .. and on my insistence took Salman and Aamir for their first one ..”

In the picture, we can see veteran actor Amitabh Bachchan and legendary actress Sridevi along with young and adorable actors Salman Khan and Aamir Khan. Big-B smiling on the camera, whereas Salman and Aamir’s happiness seemed to be overwhelming and actress Sridevi looked beauty with peace and calm, the way she used to look.

Senior Bachchan also posted the same photo on his Instagram handle and wrote a note which could be read as, ” MY concert at Wembley Stadium .. first ever by Indian .. I took Sridevi, Aamir, and SALMAN for their first concert .. 70,000 people .. historic !! This is the Wembley Stadium before it was rebuilt and altered .. you see the altered now often on Premier League Football…”

Earlier this month, the actor also shared his picture from the Daboo Ratnani’s calendar shoot 2019 and captioned his photo as, “and soon after the Sunday well wishers .. quick change of traditional wear to Western, out of a makeshift London phone booth for Calendar shoot”.

On the work front, Amitabh Bachchan will be next seen in Brahmastra directed by Ayan Mukherji.