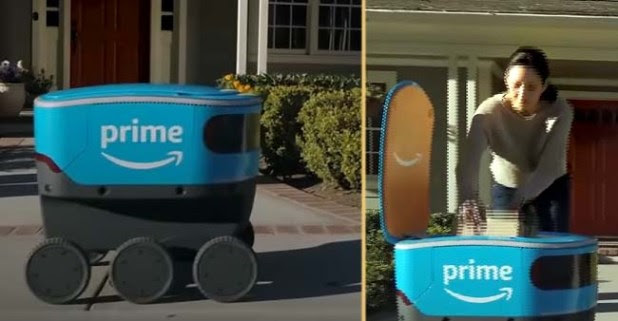 The innovation is all we need and Amazon’s new delivery service is the latest edition of innovation. The Prime bot that looks exactly like a light blue cooler on six wheels, started delivering packages in the north of Seattle.

“We will deploy when and where we have the regulatory support needed to safely realize our vision,” the company says.

The robotic device will work as Amazon delivery methods and in the starting, only six robots will be rolling around. The prime device is totally autonomous, but to start an Amazon employee will “shadow” Scout to make sure completely fulfils Prime-ly duties.

The self-driving Scout is thin on the ground, but its design looks similar to existing robots. In fact, the scout looks identical to devices from Starships Technologies, an Estonian startup that was earlier than Amazon on the respective innovative field.
One spokesperson for Starship Technologies said, “we’re huge believers in autonomous delivery robots. As the company that created this category, it’s great to see others realizing the potential.”

Amazon is reaching to complete 25 years to its inception and the company is serving as the world’s leading internet company by revenue. Jeff Bezos is serving for more than 22 years as the Chief Executive Officer of the company and also is the founder of Amazon.