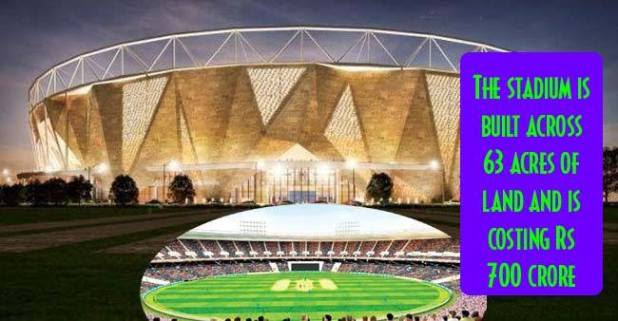 Cricket Team of India has just created history in Sydney by winning the first test series in Australia and now India has added another track record in its account with the world’s largest cricket stadium in Ahmedabad.

The picture of the world’s largest cricket stadium in Ahmedabad is shared by the Gujarat Cricket Association Vice President Parimal Nathwani on micro-blogging site Twitter which is near to its completion. As of now, the stadium is under construction. This stadium will have a seating capacity of around one lakh people which is in Motera, Ahmedabad.

Calling the stadium as the ‘dream project’ of Gujarat Cricket Association, the Sportsplex is said to be bigger than the Melbourne Cricket ground in terms of the capacity of the audience.

World’s Largest Cricket Stadium, larger than #Melbourne, is under construction at #Motera in #Ahmedabad,#Gujarat. Once completed the dream project of #GujaratCricketAssociation will become pride of entire India. Sharing glimpses of construction work under way. @BCCI @ICC #cricket pic.twitter.com/WbeoCXNqRJ

The credit of the idea of Sardar Patel Cricket Stadium goes to PM Modi whose foundation was laid in January last year.

M/s Populous, a renowned architecture firm which designed the Melbourne’s stadium is the in-charge of stadium design and the tender of construction is given to Larsen and Toubro. As per the media reports, the stadium is being built across 63 acres of land and is costing Rs 700 crore approximately.

With just 10,000 more people’s capacity in the arena, this stadium beats the iconic Melbourne Cricket Ground to be the largest one.

The stadium’s parking lot has the capacity to accommodate about 3,000 four-wheeler cars and up to 10,000 two-wheelers.

Talking about the previous Motera stadium, it had a capacity of 54,000 and was demolished in 2016 by the GCA in order to start work on the renovation.