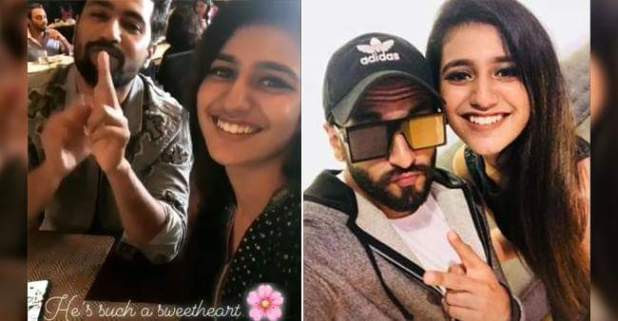 Malayalam actress Priya Prakash Varrier who took the internet booked with her viral wink met Ranveer Singh and Vicky Kaushal at Uri special screening. All the actors had great quality time together. The pictures and video from the event went viral on all the social media platforms.

The wink star, Priya got immense popularity after a small clip from her debut Malayalam film Oru Adaar Loce went viral few months back. The clip was taken from the song Manikya Malaraya Poovi where Priya achieved a lot of viewers for her wink expression.

The actress was seen spending some quality time with actor Vicky Kaushal at the screening of his recent release from Uri: The Surgical Strike. She took it to her Instagram story and shared a video with Vicky recreating the famous finger-gun kiss with her. As expected the video is making the rounds on social media. Check out the video:

The same night, Priya also met Ranveer Singh, sho is enjoying the success of his recent release Simmba. The two shared an adorable selfie which got viral on the internet. Earlier it was also rumored that Priya Prakash Varrier will be seen essaying a key role in Rohit Shetty’s film Simmba. But the news turned out to be false in reality.

Priya or the wink star girl was counted among the top searched celebrity in 2018. And last night she had her fangirl moment when she bumped into the box office star, Ranveer Singh.

She became the most popular celeb overnight. On her special moment, she said, “I am happy, but I know I still have to do a lot more to be a successful actress. I am living my dream now. I am doing what I wanted to do since my childhood. I am busy and I am enjoying every bit of it.”