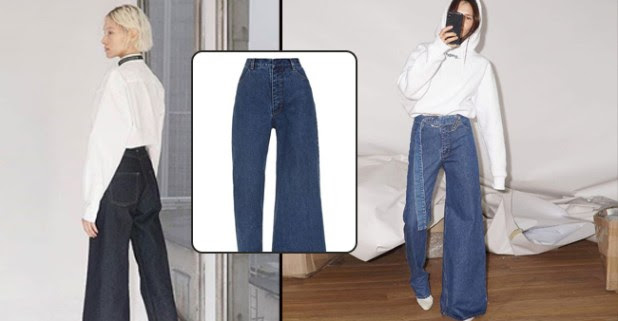 We have worn a variety of denim, from low-waisted to high one but this new asymmetrical style of denim is surely antique in its own way. Well, mostly we consider Paris, the nation for bringing new fashion styled dresses but wait a minute, the newest creation from Ukraine is giving major fashion challenge to the world. The Ukranian designer, Ksenia Schnaider has left us on wonderstruck with her Instagram post which shows a different styled ‘Asymmetric Jeans’.

The peculiar jeans come with two different designs of legs, one which is slim and narrow, while the other pair is oppositely broad in size. Considered to be the comfiest category of attire, denim has been into fashions for many years. It has shown versatility in its appearances but has always been found in almost everyone’s wardrobe.

“So far, some people have loved the asymmetric jeans, but others have asked me if they’re some kind of joke,” the designer said with a smile.

She further demonstrated, “It’s good to get people talking, and they’re definitely going to make people turn their heads as you walk by.”

“It was told the idea was too crazy and that nobody needs jeans like this, so I gave up on the idea for a couple of seasons, but in the end, I decided to go for it,” she told Dazed, the British Magazine.

But Schneider has brought a new life into the fashion sense with her new creation. According to the designer, this pair of jeans will soon be available online on her website with a price tag of $377 that equals 26,800 INR.

The strange and peculiar fashion trend is sometimes difficult for people to follow. The viral fashion on the internet has got a mixed review till now, but we need to watch that it reaches to which extent when it comes to actually pay a whopping amount of 26,800 INR.