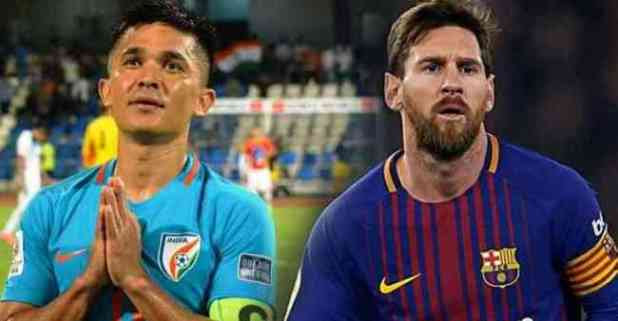 Sunil Chhetri has long been an Indian icon. But if his place in this vast nation’s football folklore was not already assured, he carved it in stone with a decisive double in yesterday’s 4-1 win over Thailand at the AFC Asian Cup.

From a long time, Sunil Chhetri has been an icon in India. He has exceeded Lionel Messi to become the second highest international goalscorer among active players. Scoring two goals against Thailand in India’s AFC Asian Cup campaign opener he managed to grab such a position.

It was Sunil’s double scorer at the 27th and 46th minutes that helped him to bag an impressive win against Thailand. This was India’s first win in Asian Cup in last 55 years when they marked up two in a four-team tournament in 1964. It was their biggest in competition history.

“You can see the jubilation and happiness,” he said. “I am so happy for the boys. Every one of them ran and defended for their lives.

“I didn’t know [that this was our first Asian Cup win in 55 years]. It feels good because it is a tough pool. When we started thinking about, we felt that all the other teams were more experienced and better than us. But the manner the boys fought shows a lot of character.”

“I have said this before, we are a very difficult team to play against. We may not be the most technical team but we will fight until the end, and that’s what the boys showed.”

Chhetri is glowing with all pride and happiness when he told about the victory. It was a momentous victory, battling triumph.