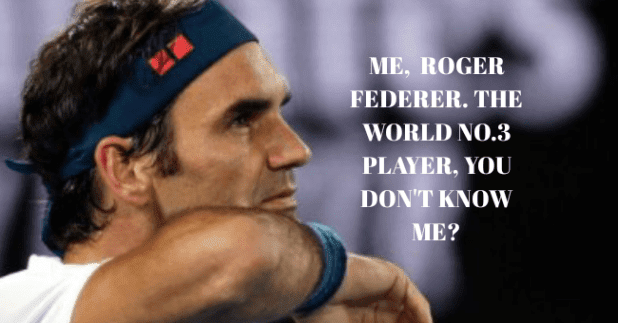 Veteran Tennis Player Roger Federer and Maria Sharapova had a weird moment at the ongoing Australian Open. Both the legendary players forgot their identity card while the checking was going on.

Rules are rules whether you are a common person or a superstar, rules are never meant for breaking. The Tennis player was not allowed to enter into the dressing room as he did not have his identity card. Steward stopped his way to the dressing room which kept the gem player waiting outside till his support team arrived and proved that he is ‘The Roger Federer’ introduced to the man who was standing at the door.

After the incident happened, in no times it started blazing the internet and even the Australian shared the same on their official Twitter account, showing a great example of impartiality. Take a look at the video

Even @rogerfederer needs his accreditation

Good morning, Melbourne. It’s only 2am 🤷

While Sharapova, the Russian player shut her eyes to the happening and ignored the situation But as per the terms and condition of Australian Open, the card which is issued to the players for the ongoing Australian Open ought to be carried all the time and the tight security left the players in an awkward situation.

The viral video shows the guard pointing to Roger for not carrying his Id card. According to the rules, coaches, officials, media members are necessarily required to carry Photo IDs and has no concern with their personality.

Meanwhile, Federer is scheduled to play opposite to Stefanos Tsitsipas at the Rod Laver Arena in the upcoming round of 16. They met each other at the Hopman Cup at the start of the season. Roger has won the previous two Australian Opens and this is the third one he is playing.

“It was very good. I came out of the blocks quick. I wasn’t missing any rhythm,” Federer said after his win over world No.91 Norrie.