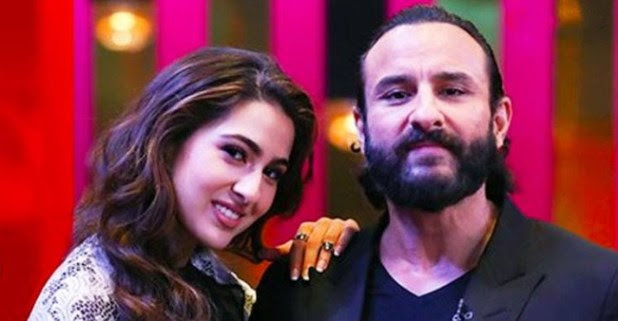 Saif Ali Khan and Sara Ali Khan one of the most happening father-daughter Jodi in the B-town has been the talk of the town after Sara has entered the B-town. Both of them graced the couch together sipping coffees on Karan’s chat show. Since then we are in love with this father-daughter pair.

With most happening revelation in the show, Sara revealed that she would like to date Kartik Aryan in real life. However, there is no official confirmation about their relationship but to add more crisp on this scoop, reportedly, it was stated that Sara will play the lead role opposite Kartik Aryan in Imtiaz Ali’s Love Aaj Kal but to add on extra masala to the venture now the recent reports say that Saif Ali Khan will have a prominent role in the film playing Sara’s father in the venture.

A leading source told to DNA, “Saif Ali Khan has been roped in to play an important role in the rom-com, which will be a sequel to his own hit film with Imtiaz — Love Aaj Kal.”

“This will be the first time that Saif will be sharing screen space with his daughter Sara. It’s not just a cameo but a full-fledged role. He will play the role of Sara’s father on screen as well,” further added by the source.

After that earlier on an event when Kartik was asked about it, the young lad replied, “I don’t know what to say to that. All I can say is she is very pretty and I am really looking forward to her film.”

The Pyaar Ka Punchnama actor added further, “Haan main matlab coffee peena chahunga (I would like to go for a coffee with her).”

Fans are going crazy for this new Jodi and eagerly waiting to see them onscreen, whereas on the work front Sara has two back to back hit films in her bags and Kartik Aryan has finished shooting for his upcoming venture Luka Chuppi.