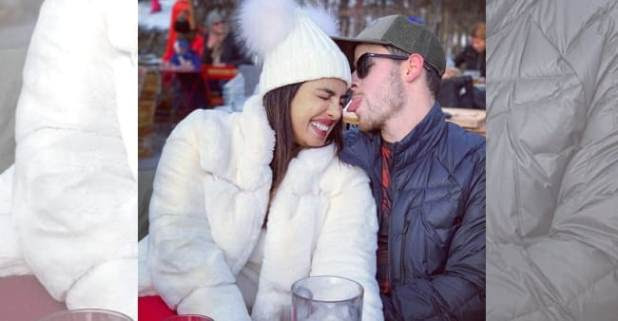 The celebrations don’t seem to stop for Nick Jonas and Priyanka Chopra. Later hosting the grand celebration of their wedding reception with a starry night at Taj Lands End in Mumbai on November 20, they left off to London to ring in their first Christmas as a wedded couple.

Priyanka and Nick had a hurricane of a romance that is all over the social media from the past couple of months. In the wake of being modest about their relationship at first, they tossed alert to the breezes and painted the town red with their romance.

Recently, in an interview with a leading daily, Nick opened up about his relationship with Priyanka and said, “It was kind of an instant thing. I knew once we locked in together that I had a partner for life and a teammate, someone I could walk through the good times and the bad times with, and that was the key.”

Priyanka and Nick celebrated the Christmas with their family in London. The lovebirds were joined for a cozy Christmas supper by Joe Jonas and his life partner Sophie Turner, Franklin Jonas, Nick’s parents Paul Kevin Jonas Sr and Denise Miller-Jonas, Priyanka’s mother Madhu Chopra and family relatives. After this, the entire family made their ways to Switzerland and their pictures from the super vacation flooded all over the social media and fans can’t stop gushing about the two.

Priyanka and Nick got hitched in two sumptuous wedding on December 1st and 2nd at the Umaid Bhawan Palace in Jodhpur.

On the work front, Priyanka will be next seen in The Sky Is Pink, directed by Shonali Bose which also stars Farhan Akhtar, and Zaira Wasim. She will also be seen in Hollywood movies including Isn’t It Romantic and Cowboy Ninja Viking.

Stay tuned for more updates of this lovely couple!