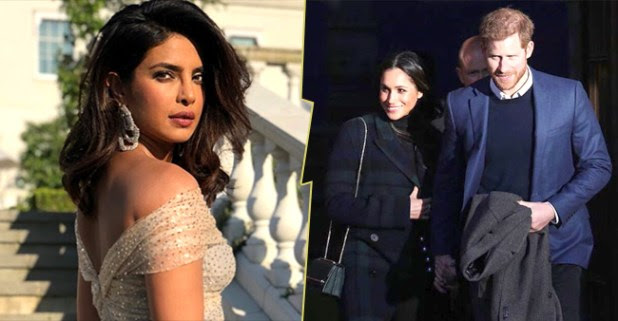 Meghan Markle has been making headlines for quite a long time. The pregnant lady is all in joy with her pregnancy. Amidst the rumors of a tiff between Meghan and Kate Middleton, the royal couple may choose their close friend Priyanka Chopra as the Godmother for the royal baby.

Presently, Priyanka Chopra, a very close friend of Meghan is considered as Godmother for the soon to arrive baby. The Royal commentator Andrea Boehlke stated that Meghan and Harry are going to have more than one godparent for their baby.

A report suggests, “Priyanka Chopra has been mentioned, as has Misha Nonoo, the fashion designer. Lots of people to choose from.”

Earlier when the Kensington Palace announced a statement which confirmed Meghan Markle’s pregnancy, PeeCee quoted, “I would, as a friend, just say that I’m really excited for her.” she was the first to give her best wishes to Markle when she shared the news on her Instagram post.

She wrote, “So proud of you for this new endeavor Meghan. This is everything you always stood for. Women supporting women. Supporting communities. Bringing Togetherness.”

PeeCee wrote, “Here you do it again.. Keep making the world smile babe.”

Priyanka also wrote an essay on Meghan Markle in a known magazine which included her in the list of 100 Most Influential People. She wrote, “Meghan, standing shoulder to shoulder with Harry, will be a princess for the people.”

At a talk show when Markle was not married, she corrected the host when he characterized Meghan as Prince Marry’s Girlfriend. She corrected and said, “Also, Meghan Markle, actress, Suits, her achievements. Just saying.”

The duo shares a great bond of friendship and nobody can deny by looking at PeeCee’s gesture. It may be a good one if Priyanka becomes the Godmother of the royal baby. And Priyanka will again be a promising one as a Godmother. Now we are eagerly waiting for the official. announcement by the royal couple.