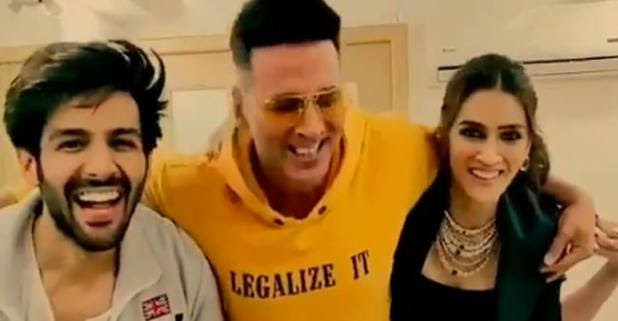 The upcoming movie Luka Chuppi starring Kartik Aryan and Kriti Sanon seems to be very interesting. Recently the makers have launched the trailer of the movie and absolutely there is a real buzz in the atmosphere with a whopping 40 million views on the trailer. The official trailer was released on 24th of January and is showcasing the new era of Indian Cinema. But apart from the trailer, the cast of the movie has already started promotions through their social media.

Kartik and Kriti on an Instagram post are looking super excited for their movie and both the stars are dancing on the hit tune ” Ladka Ladki Pagal Hogaye Pyar Mein” and to add extra element of entertainment Akshay Kumar joined the duo to enjoy the fun together. While this latest version of the older track is sung by singer Mika Singh and Shirley Setia. Take a look at the Video of the trio who are really having a whale of a time dancing together.

This video was shared by Kriti Sanon on her Instagram handle, and the actress captioned the video as, ” Poster Lagenege Fir Ek Bar. Thank you Akshay Sir. You are the best. Out tomorrow at 11 am. Stay Tuned.”

Earlier also both the stars have expressed their state of excitement on their respective social media account.

While talking about Kartik’s character, the producer of the film Dinesh Vijan told Mumbai Mirror: “Kartik plays the star reporter of a local TV channel in Mathura. We had toyed with the title Mathura Live before settling for a game of hide-and-seek. While Kartik is the quintessential good boy every girl wants to take home to mamma, Kriti represents today’s youth who advocate gender equality and have their own ideology.”

The film is slated to release on 1st of March and fans are curious to watch these youngsters on screen with this exciting drama.