Kumbh Mela Day 2: The day was all about the Sadhus and Nagas grabbing attention of the devotees 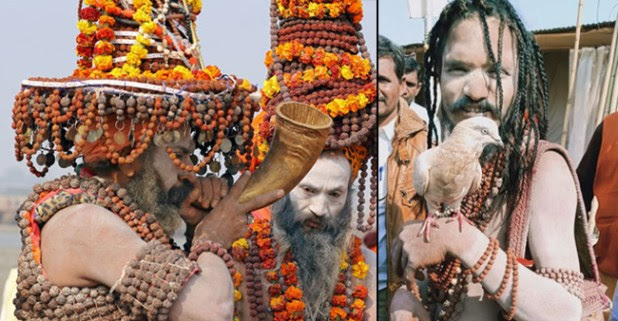 Kumbh Mela has made its remarkable inception at Prayagraj with the dominance of religious believes, the religious ministers including Nagas and Sadhus are worth marking their presence at the ritual bathing river Sangam in Prayagraj (previously known as Allahabad).

The day one was of the devotees taking a pious dip at the Sangam (Ganga, Yamuna, and Saraswati). According to the norms, nobody was allowed to take a dip into the holy river before the 13 Akhadas finish their Shahi Snan.

While the day two is all about Sadhus and Nagas, the man of the spiritual cloth with ash marked around their body are incredibly showing their importance and seeking the attention of devotees.

Mahant Shakti Giri, one of the Sadhus of the Akhada was seen sitting with his stylish sunglasses and 70-kg weight on his body, including crowns and Rudraksha Mala. His presence was worth attracting many people and devotees present at the Mela.

The Rudraksha Wale Baba spoke to India Today and said, “The crown which I am wearing weighs more than 22 kg and the other 48 kg is due to hundreds of rudhray seed chains on my body. This time the Kumbh is unique and more elaborate arrangements have been made for everyone.”

One devotee from Paris, Geanopierre, who is famously known as Hari Pyare in India, is making his presence for the second time in Kumbh Mela believes that Kumbh is an uncomparable gathering religious faith. “I have been learning Yoga in Rishikesh for past six months and people there call me ‘Hari Pyare’. I attended the last Maha Kumbh as well”, said, Hari Pyare.

The Kumbh at Pragyaraj will be ending on Maha Shivratri, 4th of March. The city is beautifully decorated for the Kumbh Mela, from the normal streets to the big infrastructures, the Government led by Yogi Adityanath has uplifted the city for this big religious gather.