From home sweet home to home Squeak home, this man built a beautiful house for mice 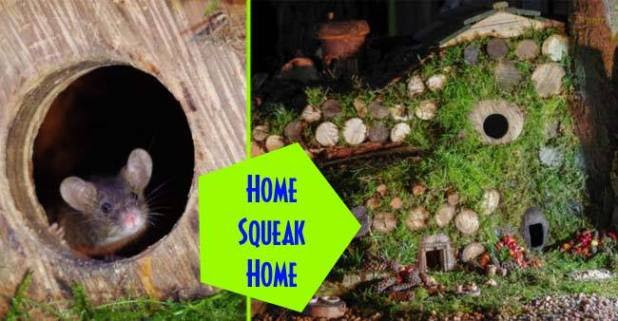 Simon Dell, the man from the United Kingdom, whose profile defines him a great photographer artist and animal lover has done something out of the box. He built a shelter in a log pile house for three mice and the tiny house looks like an adorable place to stay in.

“I decided to build the home as I wanted to give them a safe place in the garden and not fall prey to cats or other animals. Also, as I was feeding the mice it was the right thing to do as I would feel it was my fault getting them to come out if they became prey. Being a wildlife photographer, I wanted to create a nice looking habitat for any pictures I would take.”

Possible new mouse house .. Just a mock up and still not happy with the look but sure the mice will love it once finished . pic.twitter.com/cP3e8tIH0S

He added further, “The first stage of the log pile was very easy and only took an hour or so to make. As more mice came the following days, however, I made changes, adding more rooms. The inside of the box structure has 2-3 ways in and out, so they can escape if need be. Over the weeks and months, the log pile village has been steadily growing.”

The man in his garden has a special place for birds like sparrows and robins. But one day, he saw an eye catchy mouse there. His photography talent comes out to be even more beautiful after making such a tiny squeak house for the mice. The happy house of three mice includes George, Mildred, and their baby, Mini.

The Mouse Village log pile .
I get so many comments or people saying its all fake the mice are pets and the good old you are holding them with the tail to pose. so here it is the full garden log pile . pic.twitter.com/YIQ1WCuc86

“The Mouse Village log pile. I get so many comments or people saying its all fake the mice are pets and the good old you are holding them with the tail to pose. so here it is the full garden log pile .”

The photographer is fond of animals and loves to capture their beautiful snaps.