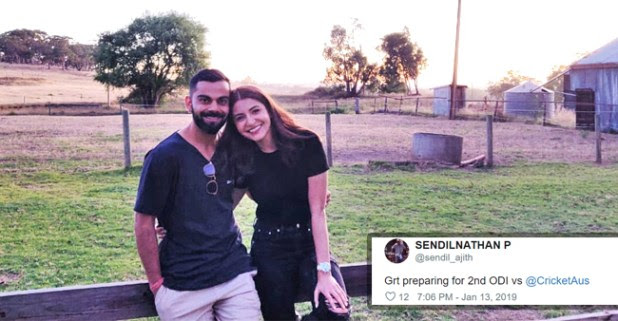 India lost the 1st ODI to Australia in Sydney and that has shattered the expectation of the netizens. Indian Cricket team captain and skipper Virat Kohli was also not in the form to make India triumph its opening one day match against Australia.

Apart from India’s underrated performance, captain Virat was captured having some quality time with wife Anushka Sharma. Virat and Anushka in Sydney were having a good time together and Virat took to his Twitter account to share their beautiful moments. He even captioned the picture with a heart emoji and with smiling faces, both of them looked happy.

But seems like people are not happy with India’s previous ODI performance and more often it seems like they are upset with the captain, as his performance in the earlier Test series was also not up to the mark. Cricket fans are not at all happy with Virat and it is clearly visible with the kind of retweet Twitterati’s are doing. Check out the tweets made by Tweeples.

VIRAT YOU HAVE TO HIT A CENTUARY IN NEXT MATCH AND MAKE INDIA WIN PLZ……. pic.twitter.com/Nkay86ys8L

One Tweeple wrote in his tweet, “VIRAT YOU HAVE TO HIT A CENTURY IN NEXT MATCH AND MAKE INDIA WIN PLZ…”

While another user of Twitter wrote, “Bro please play well at least in 2nd ODI, you are not consistent after ur century in Perth-17,81,0,28,3 this is not d VK we have seen.”

But apart from the pessimistic people, there were many fans of the legendary players who wished him luck for the ahead matches. And Kohli is Kohli, though his performance in the match was quite upsetting, team India under his captaincy retained the Border-Gavaskar trophy and the win after 71 years was terrific. Kohli had become the first Indian and Asian captain to triumph Test series against Australia and we cannot doubt on his earlier remarkable performances.