Esha Deol Expecting Baby For The Second Time, Announced It On Insta With A Cute Post 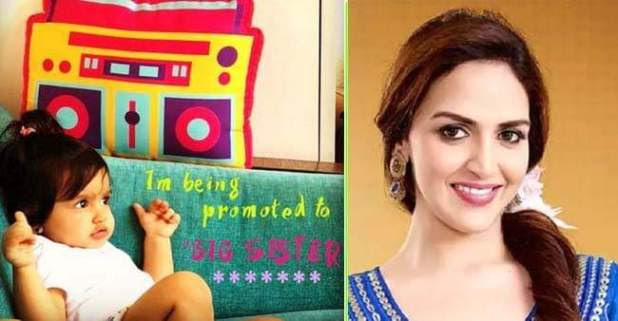 2019 has started on a good note for the B-Townies. And now, Esha Deol and her husband Bharat Takhtani are expecting their second child together. Esha made an announcement by taking it to social media with an adorable post. The post featured their daughter first child Radhya and it was captioned as, “I’m being promoted to big sister.”

In the picture, Radhya looked cute in a pink dress. Since Esha has posted the good news, she has been achieving a lot of congratulatory and best wishes. Celina Jaitley was among the first ones who congratulated her and Bharat. She wrote, “No words. So happy for you, Bharat and Radhya. Hugs.”

The couple, Esha and Bharat tied the knot back in June 2012. They welcomed their first little princess, Radhya in October 2017. And now the couple is all set to enjoy their parenthood again. Radhya is going to be a big sister.

Esha and Bharat keep their daughter Radhya far away from the paparazzi. And months ago when they shared the first picture of Radhya which took the rounds on the internet for a long time.

Post after Radhya, Esha told about the changes in her life. She quoted in an interview that, “Mamma, Ahana and my in-laws comprise a strong support system for Radhya. My life feels more complete now, after having had her. Motherhood has made me more confident, content and relaxed as a person, it has worked like magic for me. A large chunk of my daily routine involves Radhya now. As soon as I finish this interview, it will be her bath time. We maintain a strict routine for her.”

She further added, “Motherhood has also made me imbibe a lot more energy, and the yearning to live life to its fullest. I feel a huge chapter of my life has just started with the arrival of Radhya. Looking into her eyes, I understand why mamma’s eyes light up every time she sees Ahana and me.”

Further, in an interview, she also told that Radhya is a happy kid and quoted, “Radhya is a happy baby unless forced to do something she doesn’t want to do. She’s very much my daughter, and there are times when she gives me that Deol look with one eyebrow raised and I feel that I’m looking at myself in the mirror. For a long time she was supposed to arrive on my birthday, November 2, but eventually came a day after Diwali much to Bharat’s relief as he didn’t want another Scorpio in his life. Now, there are three Librans — my mother, husband, and daughter — to balance me out.”

Earlier, the news of her pregnancy was confirmed by Ram Kamal Mukherjee. And this time the proud parents themselves shared the good news with their fans.