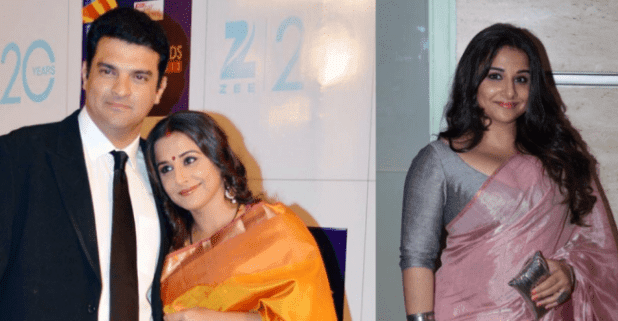 National Film Award, Five Filmfare Awards, Five Screen Awards, and Padma Shri awardee, Vidya Balan is one of the most talented actresses of Bollywood. She has worked pretty hard to achieve these prestigious awards in her long career span.

Vidya is one actress who has always experimented with her roles and succeeded in all of them. Today, on the special occasion of her birthday, we will talk about Vidya’s personal life, her love story with Siddharth Roy Kapur and much more.

As we all know, Vidya is a private person and likes to keep her personal life away from the media. But the actress shocked everyone when the news about her wedding with Siddharth broke out in the media. The actress got hitched to her longtime beau Siddharth when she was at the peak of her career.

While Vidya was a well-known actress then, Siddharth was a successful businessman, film producer and managing director of The Walt Disney Company, India.

When Vidya was finally emotionally ready, after feeling a little pressurized about marriage, Siddharth walked into her life. She was standing at the backstage of Filmfare awards when she met Siddharth. Later, it was Karan Johar who made them meet one more time and that’s when it all started.

The duo was very comfortable with each other and could have gone living exactly like this for years. It was only after Siddharth proposed that Vidya thought about how serious it was. To this, Vidya said, “When Siddharth proposed, I couldn’t believe it initially. Since we were together, I knew we would talk marriage at some stage. And then, he popped the question and did not even wait for a reply. It was taken for granted! I could have gone on living without marriage, but I do not believe in live-in relationships because it may be difficult when you want a child. When he proposed, I was like, “Okay, so now we need to talk about it.”

Vidya being a South Indian girl and Siddharth being a Punjabi munda, their marriage was a mixture of two different cultures. Vidya and Siddharth’s wedding was a private affair with no Bollywood stars present.

Vidya’s life was still the same and she continued working and making the fans go WOW with her performances. Well, some of her films failed but that didn’t stop her from working. Talking about how Siddharth’s family and how they encouraged her to work, Vidya said, “Because we do not live in a joint family, we do not come in each other’s spaces. I have gained a family, and so has he. My father-in-law is the most accepting person. They say a girl always looks for her father in her man. I will add that I have that even in my father-in-law. My mother-in-law is a professional, she is encouraging and enthusiastic. In a joint family when you share the same space or kitchen, it can become contentious. But, there is no scope for that with us.”

Vidya’s last release was Begum Jaan and we are really looking forward to seeing the actress doing more films in the coming years.

Published by Harmisha Chauhan on 31 Dec 2018