Birthday Special: AR Rahman And Saira Banu’s Love Story Is Based On His Three Conditions 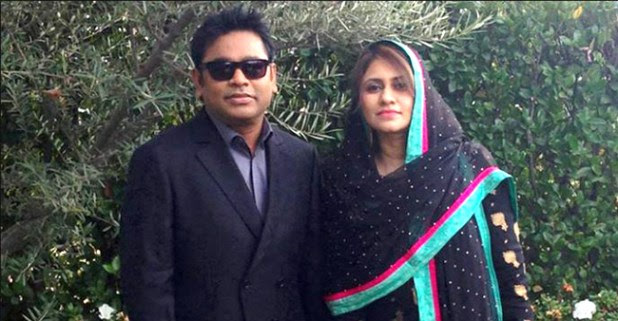 Always a singing sensation and known for his soulful lyrical music, AR Rahman is an international star when it comes to music composition and superb singing. Being an international star, Rehman is such a down to earth humble person and an introvert personality he is. Graduated from Trinity College of Music and hailing from Madras, Rahman turned a year older today and we wish him a very happy birthday.

His professional life pretty much open as everyone knows his commendable achievements and the blockbuster songs he has crooned but his personal life is not much known by fans. Just like him in every aspect, his life partner, better half, Saira Banu complemented him and his life equally.

But this match is made by his mother who found Saira when Rehman was all mentally and financially prepared to get married and he has also a clear image in his mind about what type of girl he wanted.

He put three conditions when asked about the qualities he wanted:

One fine day, AR Rahman’s mother, Kareena Begum find a lovely young damsel at the mosque doing her prayer in depth. And then there comes the twist in the tale! When she found out the girl name was Meher who is a younger sister of Rahman’s wife-to-be, Saira. Then his mother went to met his father, a Chennai-based businessman with the offer.

It was at this time that Rahman’s mom came to know that Meher had an elder sister, Saira and their father made it clear that first she would get married. But then, after meeting Saira, she thought her to be a perfect match for Rahman since she was fulfilling all his conditions or demands.

Saira is the most humble and beautiful girl, Rahman’s mother found. Throughout Rahman’s journey, Saira stands with him and was all supportive. In fact, in an interview with the Times of India, Rahman once revealed that “We had a conversation before marriage, otherwise we would have separated long back. That was my orientation to her. I had told her, if we have planned dinner and a song comes up, we will have to ditch the dinner.”

A.R. Rahman and Saira finally walked down the aisle in March 1995, when Rahman was 27 and Saira 21. Since then, the couple is growing strong together. They both are head over heels in love with each other. As Rahman is most of the time away from his family and wife, Saira, in the year 2007, was quoted as saying, “I miss him terribly when he’s away.”

Saira is his as “his fiercest critic” who “keeps (him) grounded”. They never indulge in any kind of PDA before the paparazzi.

Once at an award show Oscar, the couple was seen all over in love holding each other’s hand the entire award function where he went to collect two well-deserved awards for his work on Danny Boyle’s magnum opus, Slumdog Millionaire.

It was during the Oscars Award in the year 2009, Rahman and Saira’s love for each other could be seen completely. It was at this award show that Rahman went to collect two well-deserved awards for his work on Danny Boyle’s magnum opus, Slumdog Millionaire. The lovebirds could be seen all drenched in love, the entire award function, Saira could be seen going to her husband’s right arm throughout the ceremony.

Together, Rahman and Saira are blessed with three kids out which two are daughters named, Khatija and Rahima, and the third child is a son named, Ameen Rahman.