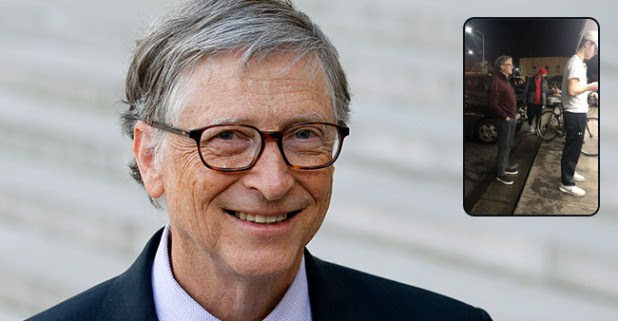 Bill Gates, the American Big Wheel is a great Humanitarian and it’s not just an adjective given to the man. He deserves every single letter of the word and many more synonyms of such words. The founder of leading MNC Microsoft has shown another example of being down-to-earth.

The recent example of his humbleness is going viral and leaving all the tech lovers in awe. A snap of this nobleman is making rounds on the internet after it was shared in the Microsoft alumni group, and was later reposted by one of its members. Bill is seen like he can’t resist his hungriness and eagerly wanting to grab those burgers.

For many of the people, he might just be a founder but you will be astonished after knowing that he has paid the highest amount of billions to a charity and that’s not an easy walk for many other big businesses tycoons.

“THIS is how really rich people behave unlike the gold toilet seat wannabe poser in the White House,” the caption reads further.

The big billionaire was wearing a casual red sweatshirt with jeans. Just like his casual attire, his hands in pocket showed a casual gesture of the billionaire’s personality, which gets paralleled with many of us. The man taught us a great lesson of being a humble person who is undoubtedly very down to earth.