Amrish Puri Special: The Mogambo of Indian cinema and his iconic roles that entertained us 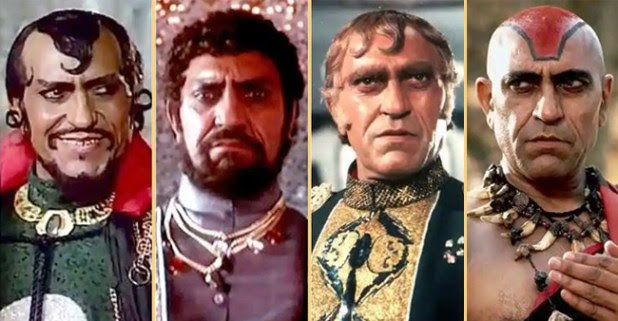 Amrish Puri, the important figure in Bollywood was born in Lahore Pakistan. The actor was famous for his pessimistic roles in Indian Cinema and one of the finest actor who went on winning many accolades in his forte of acting. We found many of his work for which he was awarded many prizes which includes an enormous list of movies.

Take a look at some of his remarkable roles which we remember forever.

Directed by Shekhar Kapur, Mr. India is till now remembered for being one of the legendary movies of Indian Cinema. Anil Kapoor and Sri Devi starrer included Amrish Puri in a black role. Amrish played the character of Mogambo who was cynically wanting to conquer the whole of India.

The thriller film helmed by Rajiv Rai was a blockbuster success at the Box Office with an ensemble cast of co-stars including Sunny Doel, Jackie Shroff, Madhuri Dixit and many more. In this movie also Amrish was playing the negative role character named Bhujang. Amrish won the ‘ Filmfare Best Villain Award’ for this movie.

1991 released Saudagar was a great contribution of Subhash Ghai. Dilip Kumar and Raj Kumar in the lead role. The distrustful role of Amrish made him win again the ‘The Best Villain Award’ for Saudagar. Amrish played the role of Chuniya Mama and created a lot of trouble for the heroes.

The drama film directed by Raj Kumar Santoshi has done great direction with the ensemble cast of the movie including Meenakshi Sheshadri, Sunny Doel, Rishi Kapoor. Amrish Puri, the Barrister Indrajit Chaddha has won the accolade of Best Villain in this drama too.

After back to back pessimistic roles, Amrish bagged the role in Karan Arjun which add up one more black role in his contribution. The movie includes Shah Rukh Khan and Salman Khan in the lead role, while Amrish as Thakur Durjan Singh created huge trouble in the life of Karan and Arjun.