Zero Song Isaaqbaazi: SRK-Salman’s Electrifying Chemistry Is Not To Be Missed 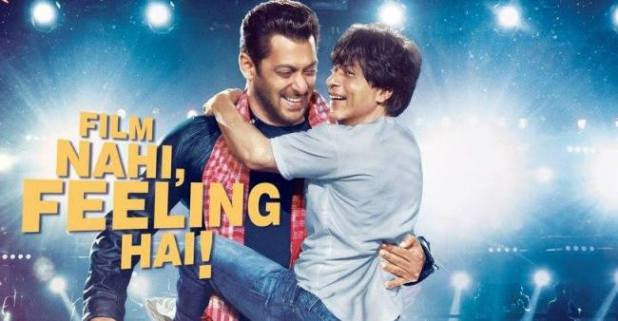 Today, another song Issaqbaazi from the movie Zero is released and we are so enchanted with it. The song features Salman Khan and Shah Rukh Khan in the same frame and fans are going crazy to see the hit Karan-Arjun Jodi back on the screen in this amazing track. Sung by Sukhwinder Singh, the track has gained 247k likes in a very short span of time.

With Salman Khan’s special performance to Shah Rukh’s midget coming venture, seems like the movie will have the surpassing records of Indian Cinema. The track is a full entertainment piece for the audience. The Jugalbandi shared by the two in the song is winning many hearts and even Shah Rukh thanked Salman for his special dance number on behalf of the entire Zero team.

He shared a thank post on the social media and was wanting to peck him for his performance, SRK tweeted, “Thank u bhai from our whole team at Zero. Phir se aapka gaal choomne ka mann kar raha hai.”

The two Khans share a healthy bond and that is clearly seen in the video. After watching a small glimpse of the song, we just can’t wait to watch the full song.

The film helmed by Anand L. Rai features Shah Rukh Khan, Anushka Sharma and Katrina Kaif in the lead role. Zero is the story of a man named Bauua Singh, a midget person whose thoughts are beyond our imagination. He meets two different women who helped him find the purpose of his life. The film brings back the trio of SRK, Katrina, and Anushka Sharma who previously featured in ‘Jab Tak Hai Jaan’.

We are eagerly waiting for the movie which will hit the theatre on 21st of December.