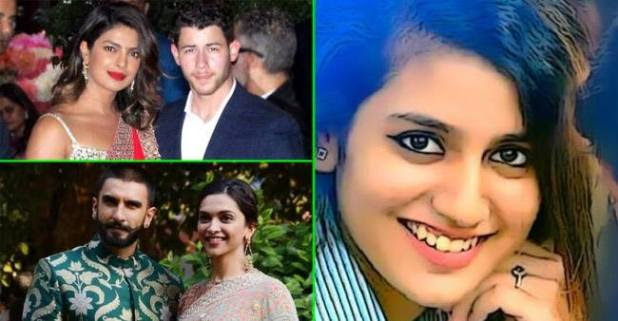 The year 2018 has been so exciting for us and it more often deviated to the social media buzzes that kept us entertained and engaged with it. So to bid adieu to this year we found few of the most headlines creating thing on the internet which comprises fun rumors and the entertaining thing for us.

We have the list of the most buzz-creating people, who kept us all going with their happening news. Not just news, they have created several records including some being the most searched person, while some spilling exciting beans about their relationship status.

1. Taimur Ali Khan- So topping our list, we have our tiny most rated star of the year Taimur Ali Khan. The Chote Nawab of the Pataudis is a full media person, his wavings at the shutterbugs and paparazzi keep us googling every next day throughout the year. The first time he said ‘Hi’ or calling Saif, ‘Abba’ went viral on the internet and created buzz around the Web. He surely brought smiles on many of the faces.

Earlier many of us didn’t know her, but the video that sizzled with her winky smile created history. Priya was compared to many of the top Bollywood actresses. The award for the overnight sensation of the year will definitely go to Priya Prakash Varrier.

Since the time the couple has announced officially about their wedding dates, they have been into the limelight. Their Italy wedding was one of the biggest happenings of the year.

Not just DeepVeer, Priyanka and Nick have also been the talk of the town, the global dominating star Priyanka created buzz with her grandeur Jodhpur wedding.

The Ambani’s have made it the enter the list because of the palatial weddings ceremonies. The Sangeet ceremony was hugely watched by Indians on social media.

The former Indian captain has made his name into the list, as he is undoubtedly the coolest player ever in history.

For more scoops, keep reading and do share your opinion with us.