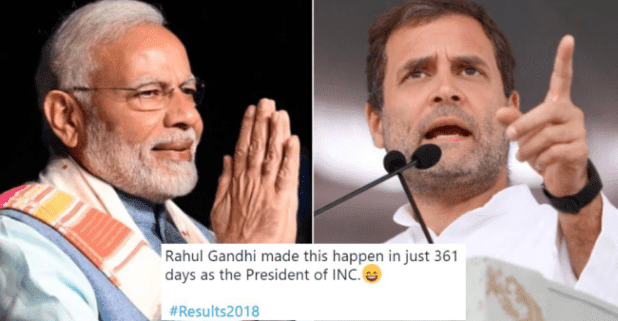 The Congress party is currently in a celebratory mood as they win as per exit polls while the ruling party is busy scrutinizing the issues that caused the loss in assembly elections. Meanwhile, everyone is waiting for assembly election results of five states including Rajasthan and Madhya Pradesh.

Twitter has played a major role in any expressing it’s views in any situation, good or bad. And when it comes to politics and taking funny and humorously savage jibes between the parties, Twitter has always made us go LOL.

The same thing happened today after Congress’ victory and Tweeps got another chance to make this popular social networking site a place of whole-full of entertainment.

So without much ado, guys, get ready to go LOL, ROFL till your stomach doesn’t stop aching. Twitteratis have got some of the hilarious reactions and take on the result.

When I see Madhya Pradesh tweeples sad over mamaji’s loss

Me and my fellow BJP supporters right now

Well, this is just a start, we know in the coming hours, you’ll get to see more creativity of the netizens where they will leave no stone unturned to mock the party who lost it.

Stayed tuned till then! Also, let us know what are your thoughts on the same. If you have some hilarious take on this current situation, kindly send your suggestions in the comment section.

Published by Harmisha Chauhan on 11 Dec 2018