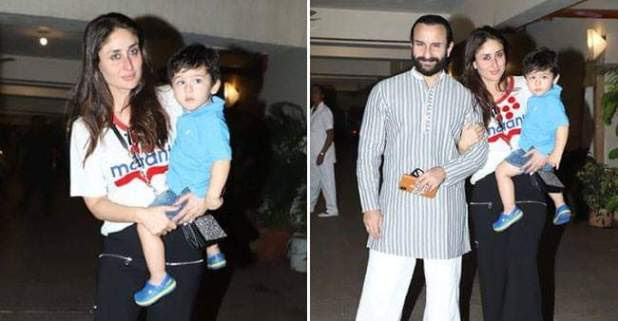 The most popular star-kid of Bollywood industry Taimur celebrated his pre-birthday bash last evening. The little munch will be turning 2 years old on December 20. Both Saif Ali Khan and Kareena Kapoor Khan hosted the birthday party for their little baby boy in Mumbai at a Hotel.

Saif and Kareena hosted a pre-birthday bash two weeks ahead his birthday. The family is going to South Africa as Kareena some professional commitments. They will celebrate Taimur’s second birthday in South America. A source informed, “In the coming few days, Kareena will be leaving for South Africa due to her work commitments and later she will be joined by Saif and Taimur there. The idea of celebrating Taimur’s birthday there has got Kareena very excited. Unlike last year, they plan to keep it low-key and more private.”

Last year, the couple organized a get-together at Pataudi Palace on Taimur’s first birthday and all the family members were invited at the celebration. But for this time it is going an intimate affair for Taimur’s second birthday in South Africa.

Meanwhile, Saif Ali Khan is busy shooting for Sacred Games Season 2 and Kareena will soon get busy with the schedules of Good News.