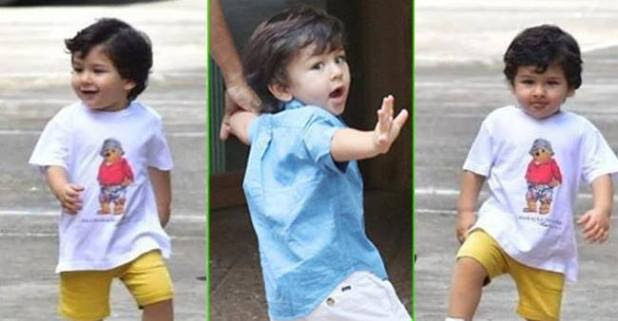 Taimur Ali Khan, whose popularity is more than from any Bollywood star is the daily talk of the town and always made headlines with his appearance at places. Born on December 20, 2016, Taimur aka Tim is stepping into his 2nd year and his birthday becomes the buzz 20 days ago. Well, that’s his charm!

Every now and then, he made us fall for him all over again with his cute and adorable antics and expression. Favorite to paparazzi and shutterbugs, Taimur is a superstar and even his look-alike doll has made the way in the market.

No other star kid is as famous as Tim and without any doubt, we love him!

With a friendly enthusiasm, Kareena and Saif Ali’s son is a star in rising and spending his birthday time with parents in South Africa. The Pataudi family went South Africa ahead of Taimur’s birthday.

Overshadowing his parents’ stardom, Kareena talked about the media attention her little one is getting and was quoted as saying, “We want him to have as normal a life as possible; we can’t take that away from him. It’s his right to have a normal life. We feel awful about the fact that he gets clicked everywhere he goes, but we can’t keep him confined to our house, right? He’s just 17 months old; he shouldn’t be given that kind of focus and attention all the time. Now he reacts to the paparazzi when they call out his name. I know this is reality and I can’t run away from it. In time, he will understand what this is all about, and hopefully, Saif and I will be able to keep it as normal and balanced as possible.”

She further added, “Now I don’t like the fact that Taimur’s every move is monitored. And people even talking about his hairstyle and all. I do not know how to control it now. Having said that, I think he’s becoming more familiar with the camera; he looks right into the camera.”

Also, father Saif had said talking to the media that he has learned a few new words. He calls me ‘abba’ and has now started to say ‘baby’ and ‘gum’. Whenever he sees a chewing gum, he would just scream ‘gum’. He likes to watch the moon, so I sit with him in my office and show him the moon.”

Saif further added, “Taimur should be freely able to take his evening outing in the park. It becomes difficult in certain situations, but the photographers are really friendly. They are just doing their jobs and they don’t push him or his nanny, which is really kind. They aren’t aggressive so I’m happy.”

Stating that the Nation’s obsession is a perfect mix of her and Saif, Kareena remarked, “He’s still so small. I hope he is bright and intelligent as his father. Right now, he’s a perfect mix of both of us. I want him to be a happy and a good person. Hopefully, over the years, his personality will develop into that.”

And on Saif being a hands-on-father, Kareena said, “Saif is quite amazing, he is so hands-on and loving. He is someone who will guide Taimur in the right way. He is experienced enough to tell me if I’m going wrong. I’m sure there will be those times, too. It’s a journey that has just begun (smiles).”