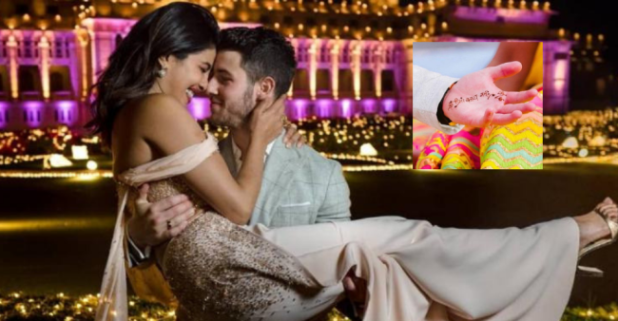 It was a magical year for Priyanka Chopra and Nick Jonas. The couple has been magnificent throughout the year since their Roka ceremony confirmed their relationship status. Our desi girl exchanged vows with international singer Nick Jonas by breaking stereotypes of age gaps and cultural differences. The huge palatial wedding was the talk of the town from the past few months.

Today, we found something really exciting from the wedding diaries. In the pre-wedding festivities, Priyanka and Nick had a colorful Mehandi celebration. And we got something very special and eye-catching. Turn your big-eyes towards Nick’s palm, did you get to see the design, it’s making us do ‘awe’. We can clearly see his palm and it states- Om Priyankay Namah, which means ‘adorations to Priyanka’, that was really sweet of him…

The couple took to their social media account and wrote, “One of the most special things that our relationship has given us is a merging of families who love and respect each other’s faiths and cultures. And so planning our wedding with an amalgamation of both was so so amazing. An important part for the girl in an Indian wedding is the Mehendi. Once again we made it our own and it was an afternoon that kicked off the celebrations in the way we both dreamed. @nickjonas.”

Recently according to the Mid-Day report, “After their honeymoon in Switzerland, Priyanka will fly down to Mumbai for a schedule of The Sky Is Pink. She will join Nick in LA towards the month-end, to host a reception for their friends. Her team is currently doing a recce in Malibu and will soon finalize a venue. It will be a black-tie event, with Priyanka’s close friends Kerry Washington, Dwayne Johnson, Ellen DeGeneres, and Meghan, Duchess of Sussex, on the guest list. Many other Hollywood stars, including her co-stars from A Kid Like Jake and Isn’t It Romantic? and Nick’s friends from the music fraternity are also expected. Besides her family, Priyanka’s cousin Parineeti Chopra is also likely to fly down for the soiree.”