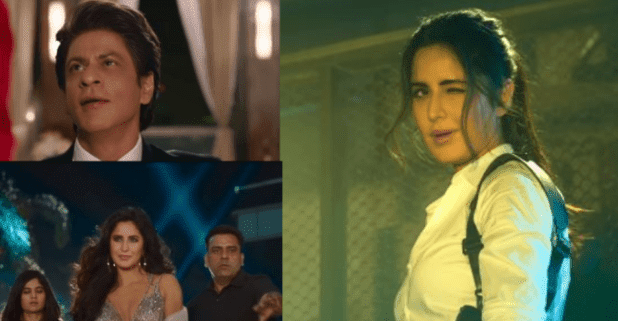 Folks, the countdown for Zero’s release has begun as the film is just one day away from hitting the silver screens and we can’t hold back our excitement. The mind-blowing promotional activities plus the back to back songs, trailers and promos have left us restless.

Just a day before the film’s release, the makers released another song from the film. The song is titled Heer Badnaam which features Katrina Kaif who plays the role of Babita Kumari in the movie. Heer Badnaam represents Babita Kumari and the reasons why she is badnaam (Maybe we are assuming for her bindaas attitude)

The song showcases Katrina’s character sketch in the film, meanwhile, Bauua Singh played by Shah Rukh Khan is totally smitten by Babita and we can clearly see how madly he is in love with her.

Take a look at the song here…

The song portrays Katrina’s character in full-fledged action avatar on the sets. Bauua Singh is completely swooning over her and his love for her is strongly evident in it.

In one of the scene, she has donned the bridal look and looks simply mesmerizing, while in another she is seen in a complete action-packed avatar. She is seen in high spirits in the song and her mind-blowing acting has left us awestruck. The song shows Katrina going through an emotional journey she experiences during her career. From being happy to sad, Katrina has showcased every emotion in this song.

Heer Badnaam is a song showing Katrina’s stardom in full glory. Her fearless bindaas attitude is visible in the song giving us an insight of her character. The amazing track is sung by Romy and composed by Tanishk Bagchi. The lyrics of the song are written by Kumaar. Heer Badnaam is a peppy foot-tapping track which will instantly make you hit the dance floor.

The beautiful song has a surprise stored for the viewers. Abhay Deol aka Nikhil Kumar will be seen in it where he plays the love interest of Katrina.

With the year about to end, we would definitely know which song will be stuck in your head and it’s surely Heer Badnaam.

Zero has some wonderful songs such as Husn Parcham, Mera Naam Tu, Isaqbaazi which are a huge hit among the fans.

The film will be hitting the screen tomorrow. CLICK HERE to book your tickets.

Published by Harmisha Chauhan on 20 Dec 2018