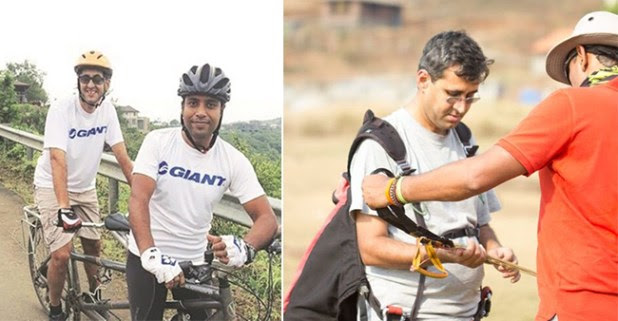 Today in our inspirational segment, we have someone who would rather not like getting sympathy for his disability but believes in breaking stereotypes related to them. Divyanshu Ganatra, the man who lost his eye-sight at the age of 19 to Glaucoma, while at such situation we despair, Ganantra kept himself stable and his determination lead him to win National Award from the Vice-President and become an IT expert.

In the year 2014, he became the first blind solo paraglider in India, well that is something when he realized that he could use this chance to change world’s behavior towards his disability.

The man dedicated 7 years of his life to the IT industry and later the impact that he felt on his mind made him relinquish the sector.

“I took up IT as a challenge. It was almost seven years of proving something, and I felt I had proved my point. I am very successful in IT and I am happy doing this. I will be happier doing something more.”

In an interview with IANS, the man talked about his love for outdoor activities and sports “I was not ready for a life based on people’s sympathy. It took some time for me to regain my mental stamina and physical strength. I knew I belonged to the outdoors and slowly started going for cycling and other activities like climbing.”

The man is different in himself when people around the world look him as an inspiration, he doesn’t like being the typical one, on the same note he said, “There is nothing ‘inspiring’ about what I have done. Paragliding or mountain climbing or any adventure sport can be done by any individual; what’s so special about me doing it? You won’t call an able person doing the same as ‘inspiration’, then why for a disabled?”

Keep reading about these inspirational people around the world, might they bring revolution in your thoughts.