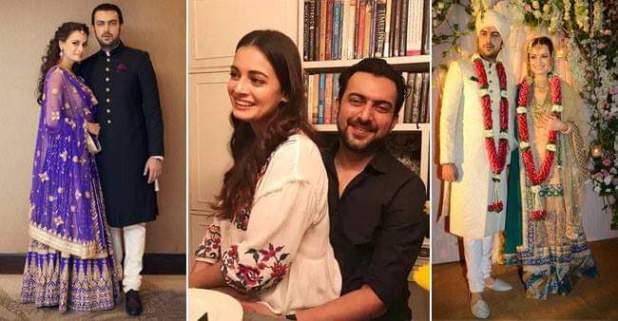 Dia Mirza is turning 37 years old today. The diva has won millions of hearts with her charismatic smile and beautiful aura. Dia got married to Sahil Sangha in Delhi. The couple finally got married on October 18, 2014, after postponing their marriage for two times due to ill health of their family members.

Their wedding was a mere intimate affair. Everybody was left inquisitive as well as excited to know more about their wedding ceremony. Today we are here to tell you about their beautiful wedding journey.

Dia and Sahil met when Sahil went to Dia’s house for narrating a script of a film. They knew each other from 2009. And layer in 2014 Sahil proposed Dia when they were in New York for an award function. He went on his knees and presented the ring to her in the middle of the Brooklyn Bridge. Dia was truly overwhelmed and accepted the proposal. Not only this the couple was even applauded with cheers by all tourists present over there.

The couple opted for the simplistic but authentic Arya Samaj rituals and ceremony. Their wedding was a 4-day affair where they celebrated a lot of pre-wedding functions. All the events were held at a Delhi farmhouse.

Dia, at her Mehendi ceremony, wore a yellow Anarkali designed by the known designer Ritu Kumar. The diva looked no less than a princess in her yellow Anarkali which was matched with a fuchsia dupatta with beautiful motifs and gata Patti. Whereas Sahil looked stylish in his contrast maroon outfit.

The Mehendi was ceremony was followed by the sangeet ceremony. The venue was fully decked up with lavishing rajnigandha flowers. Dia performed on songs like Aao Hazoor and Bole Chudiyan for his beloved Sahil. The diva looked ravishing in her bright purple and golden lehenga which was designed by Anita Dongre. She matched the lehenga with Kundan jewelry. Sahil too looked no less in his black bandhgala coat.

And finally, on the wedding day both of them stunning in their outfits. Dia looked marvelous in her sharara designed by Ritu Kumar, which was paired by a long golden jacket. Sahil looked dashing in an off-white achkan designed by Raghavendra Rathore.

After the wedding festivities, the couple hosted a grand reception ceremony for which Dia opted for a golden lehenga designed by Shantanu and Nikhil.

Dia is a talented actor, as well as she, has shown her significant contribution to the world by supporting several social causes that include conservation of the environment.