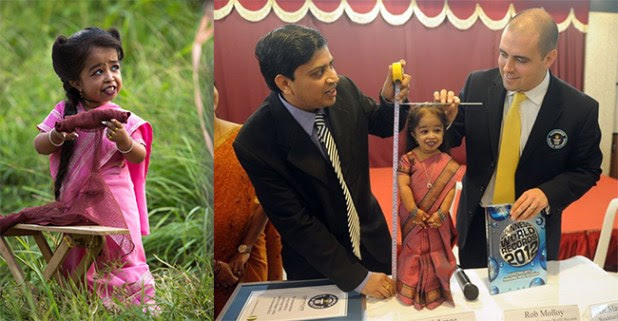 Jyoti Amge is turning 25-year-old today. She is the world’s shortest lady from India. Formally, she was involved in Guinness World Records with her height 2 feet 0.6inch as the world smallest is 2011 on December 21. Jyoti Amge was born on December 16, 1993, in Nagpur.

Let’s know some of the facts about Jyoti Amge:

1. She is only 62.8 cm (2 feet 0.6 inch) tall and weighs 12lbs (5.5 kg). This weight is just 9 lbs more from her birth time. This is due to a growth abnormality called achondroplasia that stopped her body development after she turned a year older.

2. When she turned five, her family came to know about her rare bone-degenerative disorder. After consulting a specialist, they were told her height would remain the same all of her life.

3. At the time when she was a teenager and studying in a school at Nagpur, she had her own small desk and chair. Her clothes and jewelry are customs made to suit her. Even thing like plates, utensils, bed and other necessities are specially designed for her.

4. On her 18th birthday which was in 2011, she was declared as the world smallest woman by Guinness World Records. She is 6.7 cm shorter than the previous title holder, American Bridgette Jordan.

5. Jyoti had joined Raj Thackeray’s Maharashtra Nav Nirman Sena in May 2012 in hopes of pursuing a career in public service.

6. In 2009, she was featured in a documentary titled Body Shock: Two Foot High Teen. It was produced in the UK about the lives and conditions of extraordinary people.

Moreover, she has set her eyes on an acting career in Bollywood. Jyoti’s favorite actors include Salman Khan, Katrina Kaif and Amitabh Bachchan. In 2014 she was cast in the fourth season of the anthology series Freak Show. She plays Ma Petite, mother to Gabourey Sidibe’s character.