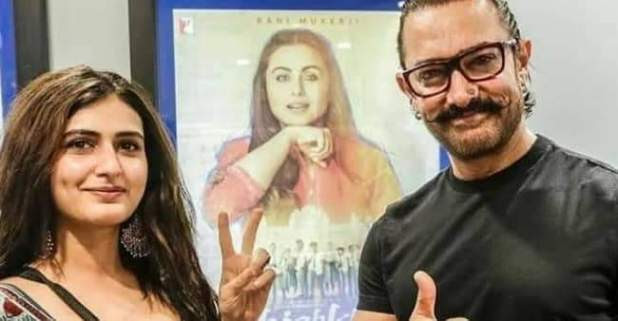 Bollywood Industry is all about glamour and status. There’s a lot of gossip and news that we hear daily. While a person who loves Bollywood would never miss these gossips as they become a very important and exciting part of their life. We come across a lot of celebrity link ups that are probably a source of our daily interests. So here are some of rumored link ups but proved to be false this year:

From a very long time, Fatima Sana Sheikh has been in news for her rumored link-up with Aamir Khan. The two worked together in Dangal and Thugs of Hindostan. Recently there were also news that nothing is well between Aamir Khn and Kiran Rao and they are going to put their ways. The reason behind this was Aamir’s growing closeness with Fatima. But shutting to all the rumors Aamir shared an adorable picture of him kissing Kiran on her birthday.

There were whispers of romance between Ranbir and Shruti when the two shot for an advertisement together. Apparently, they were also spotted having dinner and being cozy together. But the rumors turned out to be false as Shruti is in a happy relationship with Michael Corsale, whereas, Ranbir Kapoor has finally found love in Alia Bhatt. Shruti also gave a statement which dismissed all the rumors. She quoted, “I am very busy with my work and have nothing to say because these rumors don’t affect me anymore.”

There were a lot of rumors that Farhan and Kalki are very much in love. The two shared great camaraderie on the sets of Zindagi Naa Milegi Dobara. It appeared as if Farhan and Kalki wanted to hide their relationship from everyone. The duo was rarely spotted together even on social events. But the relationship news was no longer true as Farhan is allegedly in a relationship with Shibani Dandekar.

Ever since when there was news that Siddharth was dating Alia Bhatt but their break up news was confirmed by Sonakshi Sinha and her slip of the tongue on Neha’s show. Later the actor was linked up with his A Gentleman co-star Jacqueline Fernandez. The couple shared great chemistry but the rumors of their relationship were proved false.

The duo has worked together in Guest in Londo, Sonu Ke Titu Ki Sweety and some other films. They share adorable chemistry and doing back to back movies together made us believe that the couple is in love. Their link to rumors was quite convincing and increased media attention on Kartik. But later we all got to know that he has has been dating Dimple Sharma who is a model.