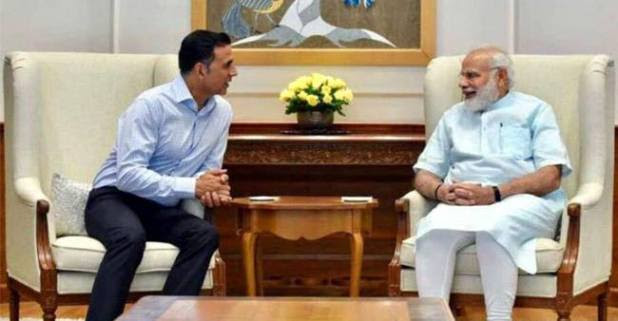 Bollywood Fraternity went to meet the Prime Minister of India, Narendra Modi including Akshay Kumar, Ajay Devgn and Karan Johar when Modi was on a one day tour of Maharashtra. They met at the Raj Bhavan to discuss the sensitive issues faced by the Indian film industry.

It was enlightening to hear the honourable Prime Minsiter @narendramodi share his views on our Industry’s soft power status and the strength of our cinema…he gave our media and entertainment representatives a patient and solid hearing….thank you Sir!! pic.twitter.com/BIl8ubQwYa

Narendra Modi said that the Indian entertainment industry enjoys immense popularity around the world and also plays a major role in India’s rising soft power status, globally. He has made sure that the Union Government will be supportive of the media and entertainment industry and would take the representatives request positively.

Heartfelt thank you to the honorable Prime Minister @narendramodi ji for taking out time to hear us at length, discuss issues pertaining to our industry and assuring positive consideration of suggestions. pic.twitter.com/ShGfr0Jlvu

This is the second time, the filmmakers met with the prime minister after October 24 this year. They, along with actor Aamir Khan and Sidhwani, had met the PM in Delhi.

An insider told, “It was a collaborative effort to come forward, address issues and seek solutions from the Prime Minister directly,” adding that the PM “acknowledged that our films are being recognized internationally and agreed that filmmakers are no less important than nation-builders”.

“He has assured the delegation that he will personally work towards setting up a special committee to look into the industry matters and address them urgently,” sources said, adding that it was a “productive meeting with a positive outcome.”

However, there is no female representative in this meeting as nobody cared about their opinions but thanks to the Netizens who are quick to react on the same on twitter. Let’s take a look at tweets:

More proof that reinforces we need affirmative action. Clearly women are not even on invite lists. Forget bottom of the lists. https://t.co/ZpvCSMbmjX

Looks like the womenfolk from the film and entertainment industry seem to have nothing worth sharing with the PM of the country. Maybe all the harassment, casting couch, pay gap, misrepresentation and sexism must have been addressed already? https://t.co/cea12BkMCN

Even after #MeTooIndia, no one cared to include even one woman in the delegation. https://t.co/khSQ2g3Egh

Remarkable that even in an industry which actually has enough women, no woman in this delegation. https://t.co/vOai0UQGhU

Well, now we wonder if any men have an answer to this question!