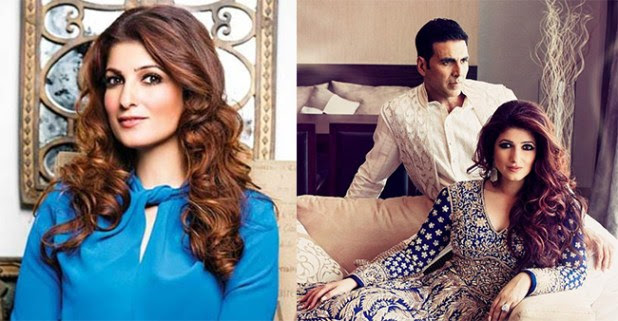 Actor turned author, Twinkle Khanna who is one of the wittiest women of the film industry turned a year older today and still is reigning our hearts. The 44-years-old actress is a talented blogger, designer and producer always knock out our hearts with her utmost charisma. Even more famous for her book Mrs Funny Bones, Twinkle has her own share of a beautiful love story with the Khiladi of Bollywood, Akshay Kumar. The couple has shown us ‘how to be in love and admire each other even after 17 years of blissful marriage.

Let’s talk about their most romantic love story on Twinkle’s 44th birthday!

While Akshay entered in Bollywood Mahesh Bhatt’s film, Aaj, in 1987, the actor managed to set himself as a successful actor in the year 1990s. He is famous by the name Khiladi Kumar as he has done a series of films with the same name in movies’ titles. On the contrary, Twinkle debut in Bollywood in 1995 alongside Bobby Deol, a Rajkumar Santoshi movie, Barsaat, that became the moderate hit.

Their first meeting happened during a shoot for Filmfare magazine, in Mumbai where Akshay had an instant crush of Tina. In one of his interviews with Filmfare, the actor confessed the same and said, “I met Twinkle for the first time during a photo session with Jayesh Seth for Filmfare. I still have that photograph. Thank you, Filmfare!”

Later, at the shooting of one of their film together, International Khiladi, the duo fell for each other and the rest is history.

More than her beauty, Akshay got attracted to Twinkle for her qualities as he once said, “Twinkle is one of the most wonderful, talented and headstrong women.’’

Even Akshay has also irresistible qualities and charm that made Tina marry the handsome hunk who is a trained Martial Artist. In a chat show, Koffee With Karan Twinkle had revealed that she was pretty much confident about her movie, Mela that it would do wonders at the box office and if it didn’t she had said she would marry Akshay. Luckily the movie flopped, and soon they got married.

The duo got married in a low key wedding on January 7, 2001, in designer duo as well as friends, Abu Jani and Sandeep Khosla’s residence with only 50 guests in attendance. Bollywood actor- Aamir Khan, politician- Amar Singh, renowned director- Dharmesh Darshan, were among the few guests at the wedding that happened in only two hours. People got struck by the news that the two actually exchanged the wedding vows.

The couple is blessed with two children, Aarav and Nitara and their love, respect, and support for each other is making this relationship work out.

If talking about marriage and these two lovebirds don’t catch attention and what would be the talks. They are an inspiration for the young couples where she is a perfect housemaker, interior decorator, a loving and caring mother and a supporting wife, in short, a superwoman who made Akshay with her unfailing support to become a Bollywood star. On Koffee With Karan, Akshay also talked about the secret behind their strong relationship. The actor told, “We keep on discovering new things about each other because we are so different. We are poles apart.”

Also, on being asked about the one decision that changed his life, his answer surely made all the viewers go aww! He said, “The one idea that changed my life was the day I decided to get married to my wife.’’

Well, the superstar actor had dedicated a song of his movie, Special 26- Mujh Mein Tu which he sang himself and made us weak in our knees. In one of his interviews with Filmfare, he talked about how Twinkle has always been a source of strength for him. He said, “Twinkle has not only added to my wardrobe but also to my bank balance. I was a scattered person; she is the one who has put me together. After marriage, she has kind of raised me (Laughs). On a serious note, whenever I’ve broken down she’s given me emotional support.”

And in one of his interviews with HT, he also said these beautiful things for his wife:

“Tina (Twinkle) is my best friend. My wife is the best person any man could wish to wake up next to. She holds me up when I’m falling, and puts me down when I’m flying. She makes me laugh when I’m sad and moans when I am sitting idle. Tina is everything for me. She is my reality check.”

Praising her hubby, Tina had said, “He really believes in my capabilities as a person and that gave me a lot of confidence to switch jobs. Even today, if I do something new, he ensures he is a part of it. For instance, I have been writing a weekly column in a newspaper since a year now (the interview was conducted in September 2014), but he still reads all my pieces before I submit them.”

Not only this, for Akshay a romantic date means “a six-kilometre jog, followed by 500 crunches… TOGETHER! Eeeeks!”

Also, talking about her relationship with Akshay in the same interview with HT, she mentioned, “It drives me nuts how he has sneakily and steadily wormed his way into becoming my best friend. I like him more now than when I married him!”

Talking about reaching half-century mark in life, he said, “Am I allowed to say it feels as good as it did when I turned 21 (laughs)? I’m really enjoying the fact that I have not only reached 50 alive but also feeling positive about my career, blessed for my health and over the moon with how I’m spending my big 50 on the Swiss Alps with my family.”

“My wife could buy me an island, but I’ll still just want to walk on Juhu Beach (in Mumbai) holding her hand — something we do for free whenever we want, but to me, that’s what I call magic.”

A truly magical love story which is still growing makes us fall in love with them!