Birthday Special: Govinda Was Once All In Love With Neelam Kothari, Harsh Truth About One Sided Love Of Actor 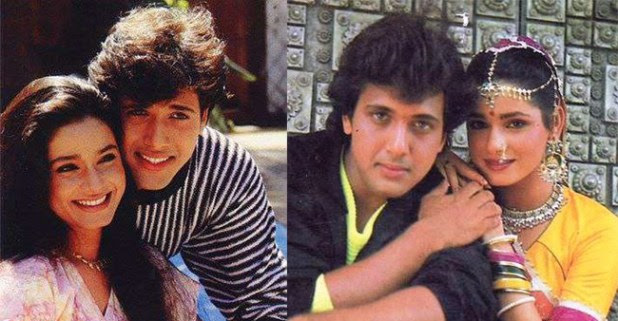 Govinda or Hero no.1 ruled Bollywood with his notorious nature and still holds the heart of many. The actor who is known for his dancing moves, turned a year older today and as he stepped in his 55th birthday, let’s take a rewind to those golden days when the young star was all over in love with Ilzaam actress Neelam Kothari. As of now, Govinda is married to his childhood friend, Sunita since March 11, 1987.

Talking about the era when Govinda was the star that director wants to cast him, the actor fall his heart for Neelam when they made their debut in Bollywood with Ilzaam. In an old interview with the Stardust, Govinda confessed his undying love and care for Neelam which he referred to as pure love and not lust!

They both gave many hits together and their on-screen chemistry was to die for but in real life, they were two different poles where Neelam was an NRI and our Munda was desi. He had said, “I was never her cup of tea anyway. I am a ghatti. An unpolished boor and she’s a Dresden doll. Clean, pure, polished and dignified. We would probably never have got along.”

Recalling their first meet in Pranlal Mehta’s office, Govinda stated, “I remember the first time I met her. At Pranlal Mehta’s office. She was wearing white shorts. Her long hair falling straight, like an angel’s. ‘Hello’ she said politely, and I was scared to reply because my knowledge of English was embarrassing. It still is. And I wondered how I would communicate with her on the sets. I had never imagined I would work with her. She was a distant dream. I had seen her in ‘ Jawani’, and seen the film again and again only to see her.”

He further added, “I was very conscious of her. Of the difference in our backgrounds and upbringing. But gradually, we crossed these obstacles, and I started opening up. I would play pranks, crack jokes and she would laugh. We became friends. And we had so many films together. We met so often and the more I got to know her, the more I liked her. There was dignity in her. A kind of piousness in her eyes. And the strength of character. There was no vulgarity about her, no loudness. She was the kind of woman any man would have lost his heart to. I lost mine.”

Govinda also remarked that he tried to mould his girlfriend Sunita like Neelam for which Sunita lost his calm. He said, “I couldn’t believe that such a young girl, even after attaining so much name, fame and wealth, could be so simple and down-to-earth. I couldn’t stop praising her. To my friends, to my family. Even to Sunita, to whom I was committed. I would tell Sunita to change herself and become like Neelam. I would tell her to learn from her. I was merciless. Sunita would get irritated. She would tell me, ‘You fell in love with me because of what I am, don’t ever try to change me’. But I was so confused. I didn’t know what to own.”

Govinda didn’t want to get involved in a serious relationship with Sunita as he stated. He just wanted a girl to roam around with, Govinda quipped, “I had never meant to get so seriously involved with Sunita. I was looking for a girl to go around with. I had signed a few films by then, and one day, my elder brother Kirti came to visit me on my sets. I had to do a romantic scene but couldn’t bring myself to do it. I felt very uncomfortable and awkward holding a girl in my arms. So, later, my brother told me, ‘Why don’t you have an affair just to get some experience of romance? You’ll at least, learn how to hold a girl in your arms’. At that point in time, I met Sunita. I admit that my involvement with her was a totally calculated move on my part. And I paid a heavy price for it.”

Calling Neelam, an ideal girl who is married to Sameer Soni currently, Govinda added, “Yes, I wanted to marry her. And I don’t think there’s anything wrong with that. I feel love and hatred are two emotions over which a man has no control. If you love somebody and they reciprocate, there’s nothing one can do about it. It is instinctive. What is under our control is our sense of duty and commitment. Neelam was the ideal girl, the kind every man visualises for a life-partner. The kind of girl I wanted. But that was getting emotional. There was another practical side. Just because I had fallen in love elsewhere, I couldn’t overlook my commitment towards Sunita. If there was no sense of duty in a man, this would go on. Leave one for another and another for another…”

Not only Govinda, his dad too wanted him to marry Neelam whereas his mother felt that if he has given his word to Sunita, so he must honour it. Govinda opened up, “My dad was very keen that I marry Neelam. He was very fond of her. She had even visited him with her family. Yes, she had come to Virar. Actually, I took her and her mother to see my father. And he was very happy. But my mother thought differently. She felt that since I had given my word to Sunita, I must honour it. And I knew that if I didn’t do it, it would hurt her. And for me, no relationship can be more important than my mother. Her happiness will always be my primary concern.”

According to Govinda, Neelam was a very ambitious girl and wanted to be a number 1 heroine in the industry. Govinda claimed, “And anyway, Neelam had ambitions of her own to fulfil. Every time I broached the topic of marriage, she would laugh it off. She wanted to become the Number One heroine. She loves this profession and she’s lying when she says so matter-of-factly that she doesn’t much care about what happens to her career. And that it doesn’t affect her. She is very ambitious, take it from me.”

He further added, “She wanted an intelligent, well-to-do, good-looking man as a husband. And I was anything but that. She belonged to the upper strata and I was a dehati, coming from a lower-middle-class family. We were poles apart in every way. We probably would never have been successful as a married couple. And maybe, Neelam realised that.”

Govinda revealed that another hurdle that came in their relationship was when Neelam started working with other actors, which made him absolute jealous and insecure. He confessed, “But the actual problems between her and me began when she started working more and more with other heroes. I was consumed with absolute jealousy and insecurity. I was scared that I would lose out on her totally. And that she was the only, one good heroine that I had. And then ‘Aag Hi Aag’ and ‘Paap Ki Duniya’ became hits. She started signing more films with Chunky, Sunny, Mithun, Chintu, I was very upset.”

On playing dirty with Neelam as she didn’t know about his marriage with Sunita till one year, Govinda acknowledged, “In the meantime, my mother wanted me to officially marry Sunita – we’d had one ceremony in the mandir. For that matter, we were husband and wife. But I had not disclosed publicly my marriage to Sunita because I felt it would affect my career. Neither did Neelam know about it. She got to know only after a year. I probably did not tell her because I did not want to break this successful screen pair. And to be honest, to a certain extent, I did exploit my personal relationship with Neelam for professional ends. I played dirty with her. I should have told her that I was married.”

Justifying his act, Govinda said, “But there was always such a conflict going on in my mind. After meeting a girl like Neelam, any man is bound to lose his balance. I lost mine totally. I was so confused. I liked her tremendously. I was in love with her. I wanted to marry her. But I couldn’t. And yet, I didn’t want to let go. Even today, I feel jealous when I see her working with other actors. I wish she would start signing films with me again. If not anything, we could at least be friends.”

Hero no.1 was left alone with his one-sided love. Govinda quoted, “Of course, she’s very cordial to me whenever we bump into each other. But my heart still misses a beat when I see her. I feel like screaming in despair. If only I had not promised to marry Sunita. If only… I still care for Neelam. And I always will. I don’t know why she stopped signing films with me. And cut me off totally from her life. Maybe she felt that our pair was going stale on screen. The same old dancing, the same old steps, the same old Govinda.”

He committed with Sunita after a period of time but he never shies away showing his endearment for Neelam. Govinda was quoted as saying, “That is why I hate it when my relationship with Neelam is termed as an affair. It somehow demeans the status of the relationship, the depth of my feelings. And I say my feelings because I can only be sure of them. What she felt, she knows. Maybe there was nothing from her side. But I will never deny my love and reverence for her. I will always care for her. For me, it was love, not lust. Love in its purest form. I know she was too good for me. She probably deserves better. And I do wish her all the happiness in the world. The man she marries will be the luckiest man on this earth.”

He also revealed the stars written in his life and said, “Tomorrow, who knows, I may get involved again, and then, maybe I will marry the girl I get involved with. But Sunita should be prepared for it. Only then will I feel free. And there is a second marriage in my kundali.”

The married couple, Govinda and Sunita had their own fair share ups and downs but they somehow stood for it and leads a blissful life. Even after knowing his one-sided love for the actress, Sunita stood tough like a rock with him!

Well, Govinda is such a charm and we love him for his honesty. Happy Birthday, Star!