Birthday Special: Anil Kapoor’s Love Story With Sunita Is No Less Than A Fairytale The actor is 60 plus, however, he doesn’t seem to be. Anil has perfectly maintained his health and physique and is giving major fitness goals to many others who at this age is down with various medical issues and their age effects can be clearly seen on their face. Anil is still dashing and handsome can also romance many leading ladies of Bollywood.

Anil has been in the showbiz for more than two decades and is happily married to Sunita Kapoor. The actor is one woman man and has never been involved with any other actresses. Anil is a complete family man and is a proud parent of three beautiful kids Sonam Kapoor and Harshvardhan Kapoor who are walking on the paths of their father and are successful actors while Rhea Kapoor is a fashion stylist. 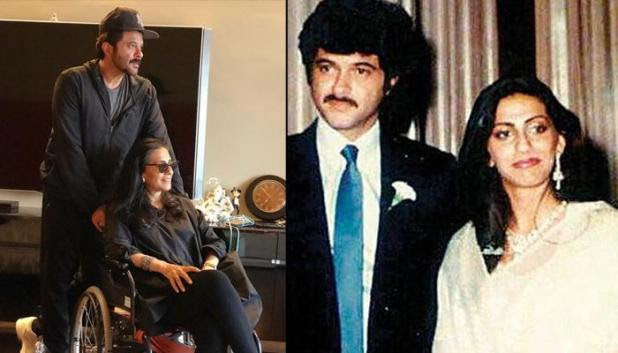 Anil and his kids might be constantly under media scanner being big stars, however, Sunita has always stayed away from the limelight. She is only spotted with her husband and kids on some important occasions.

So, want to know, how Anil met Sunita and how they fell in love with each other…here’s the beautiful love story of the two.

Anil and Sunita’s meeting was pretty filmy one as Anil was struggling to find work in the film industry while Sunita was a successful model in her times. Sunita’s father was a big personality who was working in a high position in a reputed bank. When the two met, Anil had no way to contact Sunita. But to his delight, he got her number through his friend, and they started talking over the phone. The duo started talking over the phone and after one meeting in person, they started liking each other and then went on to have an affair.

Anil while talking about his wife in an interview said, “I met her on the telephone, and fell in love with her voice. I feel shy and awkward when I speak about her, but I love speaking about her. She is wonderful she is beautiful; she is the best thing that has happened to me.”

While Sunita was quite successful in her career, Anil even after being a producer’s son was struggling to get work and that fame. After a lot of efforts, Anil landed a project Woh Saat Din and post that he started getting various offers. However, Anil’s main aim was to marry the love of his life Sunita. Sunita’s parents were not really happy about their relationship as Anil was still not that successful. However, the duo convinced them. But problems did not end here as Anil had now become a successful star and people said that if he would marry at this time, his career would end. Anil got influenced by this and postponed his wedding twice.

On this Anil said, “In those days the industry believed that the audience liked an actor only until he was unmarried. My well-wishers thus advised me not to get married else my career would be ruined. But then I asked myself, what is more important to me, my relationship with my girlfriend whom I know for years or my career? I was puzzled. But then it struck me that I am in a love with such a beautiful girl and we have been together since 5 years and sticked together through thick and thin, and so marriage was paramount for me that time.”

Post wedding, Sunita sacrificed her career and dedicated her whole time and life for Anil. She helped him in all ways and today, they make a great family.

Here’s wishing Anil Kapoor a very happy birthday and a lifetime of happiness.

Published by Harmisha Chauhan on 21 Dec 2018