A List Of Most Viral And Craziest Trending Challenges of 2018 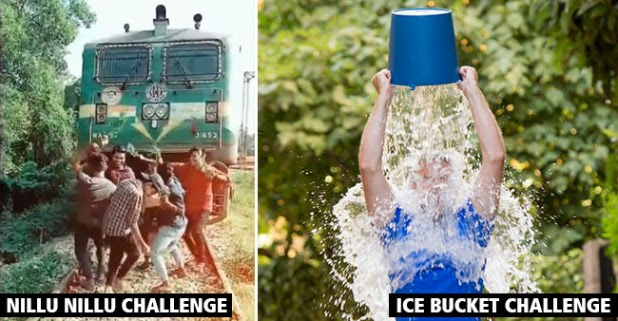 Social media has become a very crucial part of our lives. People do a variety of different things that go viral or evoke a laugh out of someone. And we need to know about some of the internet challenges that have gone viral and have become the latest trends on social media. Over years we have seen trends that include staying still, crazy dances etc. Here’s a list of the top social media challenges to ever hit the internet:

The challenge started with Drake’s song Kiki, Do You Love Me? In this challenge, people dance to the song while being filmed jumping out of moving cars. Basically, in this, you need to get out of a moving car and dance along the song. It became an internet sensation that first went viral followed by Will Smith and Ciara posting their own videos. Ever since then, people have been posting videos dancing next to moving cars. Some of them get success with it while otherwise not.

The Nillu Nillu challenge involves a group of people jumping in front of moving vehicles on the road and dance after the vehicle stops. Social media was full with the videos of this challenge which first appeared on TikTok.

This is one of the most interesting challenges where you would have a friend, a bucket full of ice water which will be poured on your head.

This challenge was filmed often using the song Black Beatles. People had to remain absolutely frozen like a Mannequin in their positions while being filmed.

The Deli Challenge was started by Tottenham Hotspur midfielder Dele Alli. The footballer’s hand salute went viral on the internet and since then, there have been a lot of people doing it.

These are some of the craziest challenges we all have overcome this year. And it seems that some more exciting challenges are on its way.