These Are The Super Champions Of The Widely Popular Game PUBG 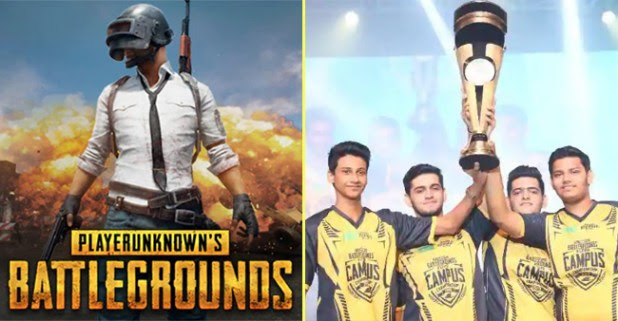 Till now, everyone should have heard about the most trending game PUBG. It is an online multiplayer game which has crossed 100 million downloads. It has now aim towards to push e-sports in India, looking at its popularity. On Sunday, the gaming studio announced its first PUBG Mobile Campus Championship in India. A team of four members The Terrifying Nightmares from Mumbai played and won the game, taking Rs. 15 lakh prize money to home.

The members of the winner team shared some of the tactics required to play the game. In the team, Amit and Sakriya play an aggressive game as front heads and the other two Anand and Mehul plays a supporting role. Sakriya is the one in the group who is grenadier [one who throw bomb].

The four are ace player of PUBG Mobile and now aims to reach the Conqueror tier in the fourth season of PUBG MOBILE.

Hindustan Times spoke to these fantastic four players of PUBG to understanding the game. Here what they say…

The strategy of Amit, Sakriya, Anand and Mehul for the game. On this, they said, “Our main strategy was to land in Pochinki and dominate the area. If at all any team landed there, we would make sure we eliminated all of them and would hope that the zone would end up on us. If it did not, then we would make sure we moved to the center of the circle. If there was any difficulty, we would improvise but we would mostly try to stick to the plan. The only strategy that remained constant was to stay close and use everyone’s strengths to win the round.”

The toughest moment for them was losing Match 03 of the grand finale with 0 kills and coming 12th out of the 20 teams.

Do you think PUBG MOBILE is more of a tactical game than a hardcore First-Person Shooter (FPS)?

Yes, according to me, PUBG MOBILE is a strategic game. It’s not like other FPS games where you just have encounters with enemies. Players need to run towards the zone depending on how it changes. They need to plan how to conquer a particular area or a particular apartment. We have to be trained on how to cook and throw grenades.

Do you think PUBG Mobile can be made more user-friendly when it comes to weapon shortcuts?

At first, it was difficult to play on a mobile but once you get the hang of it, it becomes easy. We have now mastered skills on mobile devices and can switch weapons easily. Moreover, gaming on high-end devices has evolved enough to support heavy games.

How big of a role does graphics play in PUBG MOBILE?

Graphics play a very big role in PUBG MOBILE. Higher graphics have greater detailing of buildings, players, open spaces etc. The game runs smoothly on high graphics, making it easy to aim and shoot enemies. The four players say if they gave a lower-spec, smartphone then they would go for low graphics and high frame rate.

They had used  OPPO F9 Pro in the finals and they had a seamless experience. When asked about the one thing they like the most in the game. Players said, “The whole concept about making strategies to win with your squad is exciting. Getting to connect on this platform is something that PUBG MOBILE is successful in creating. The game is so realistic that you tend to fall in love with it every time you play.”