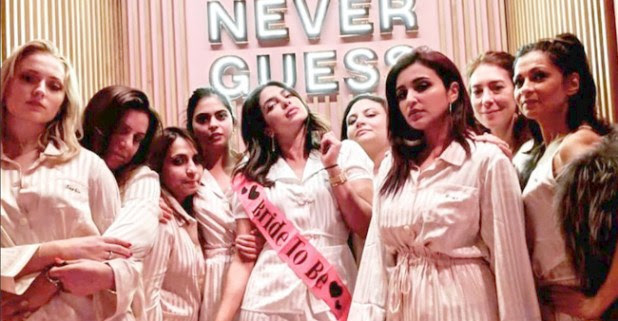 The popular couple, Priyanka Chopra and Nick Jonas are soon going to get hitched on December 1, 2018, at Umaid Bhawan in Jodhpur. PeeCee, the gorgeous diva has already started giving us all high bridal goals. The pre-wedding celebration has begun for the actress as she recently goes out to enjoy with her bride sqaud.

Earlier, a few days ago Priyanka had her Tiffany-tastic bridal shower in New York City. She treated her family members and close friends by heading in Amsterdam for her bachelorette. Priyanka’s squad was seen in a free spirit mood and they all enjoyed a lot. The bride-to-be is having a lot of bachelorette parties. The latest one is featuring her girl gang.

Making an end towards her Amsterdam journey, Priyanka hosted a pyjama and heels party. Her cousin and actress Parineeti Chopra. Among others, Games of Thrones fame Sophie Turner and Armie Hammer’s wife Elizabeth Chamber also marked their presence.

Priyanka looked beautiful in her trendy pink pyjama suit and paired it with black heel boots. This dress code was followed by everyone in the party. Priyanka took it to Instagram and shared two photos with her squad who looked stunning in pink. The actress became the center of attraction as she wore a sachet with the phrase Bride To Be written on it.

Meanwhile, it is clearly visible that Priyanka’s cousin Parineeti Chopra has an already made a brother-sister relationship with Nick Jonas. It was evidenced by their recent Instagram banter on one of Parineeti’s and Priyanka’s picture. Nick reacted to the photo and wrote, “Wow she’shard to get! so beautiful. Any chance you could introduce me?” Looking forward to it Parineeti replied, “She’s very But I can try for you if you agree to pay the 5 million dollar shoe hiding fee!”

We can surely say that Priyanka and Nick are really excited about their wedding and their togetherness have now become a major topic of conversation.