Statue of Unity crosses over 27000 visitors in just one day 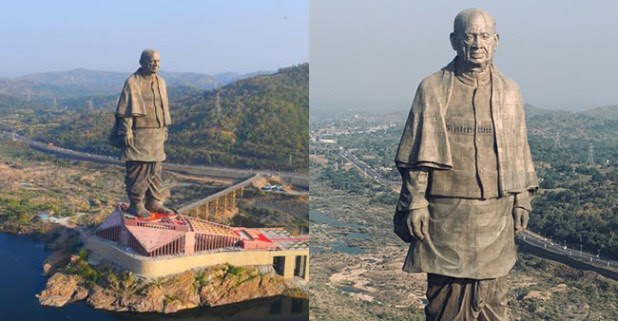 The Statue of Unity in Gujarat’s Narmada district, highest Sardar Patel memorial was inaugurated by Prime Minister Narendra Modi on October 31 and was opened to the public on November 1. Since its inauguration over 27,000 people visited it on Saturday. The statue is built on an islet near the Sardar Sarovar Dam in Kevadiya at 182 meters in the tallest structure in the world.

Just 2 weeks have passed and a lot of people are finding it interesting. It is the tallest statue in the world and is considered as the Statue of Unity. The theme of the statue attracted the people from all parts of the country. People are visiting and celebrating the unity of India with the tallest structure.

With an approximate number of 5000 people per day are seen at the viewing gallery inside the statue and Gujarat Government is asking the tourists to plan their trip in advance.

According to a government statement, “The two lifts at the Statue of Unity can carry up to 5000 people in a day to the observation deck. Therefore, all the visitors are requested to plan their visits keeping in mind the timings as well as the capacity of the infrastructure.”

The statement further added, “It is a request to the people of Gujarat to plan their visits in a way that there is no overcrowding and no one comes back disappointed from the Statue of Unity visit.”

In another statement, the  state government appealed the visitors, “To plan their trip keeping in mind the timing as well as the capacity of the infrastructure at the Statue of Unity.”

The government also informed by releasing a statement that the memorial will remain closed on Monday for the maintenance. Apart from the statue the visitors can fo the Visitors Centre. souvenir shop, exhibition hall, viewing the gallery. The entry ticket for the statue and visiting gallery is Rs 350 for adults and Rs 200 for children in the age group of 3-15 years.