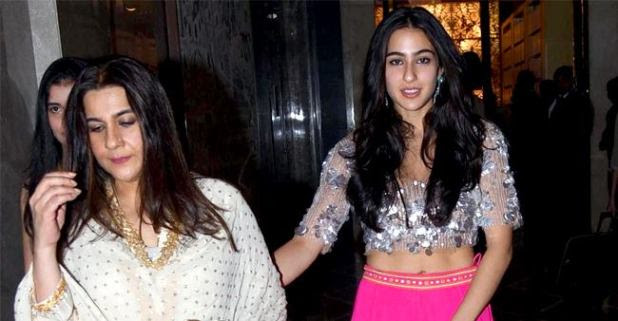 Like mother like daughter pair Amrita Singh and Sara Ali Khan, the two beauty of different eras share things alike and unlike. In the internet collage of Sara and her mother, Amrita Singh has been shared by one of the several unofficial Instagram profiles run in Sara Ali Khan’s name, in which it is just not possible to miss the resemblance between the mother and daughter.

Amrita Singh, the renowned actress was born in a Sikh family wherein her mother Rukhsana Sultana was Muslim and was a political party member during Indian Emergency in the 1970’s and her father was an army officer Shivinder Singh from a feudal family.

On the other side daughter, Sara Ali Khan who almost resembles her mommy is the eldest child of Saif Ali Khan and ex-wife Amrita Singh’s two children. Sara Ali Khan belongs to the royal and nawabi family having Sharmila Tagore, Mansoor Ali Khan Pataudi, Rukhsana Sultana, Shavinder Singh as grandparents.

The 60-year-old actress Amrita Singh does not have any Godfather in the film industry and it was hard for her to enter into this Tinsel world, but her determination and talent were beyond everything and hence she proved herself as a remarkable actress of the Indian cinema.

Singh made her Bollywood debut in 1983 with Betaab, a huge blockbuster film in which she was paired with Sunny Deol. This was quickly followed by a succession of hits, such as Sunny in 1984, Mard (which was the biggest hit of that year) and then Saaheb.

Wherein Sara Ali Khan being a star kid who is making her debut movie Kedarnath opposite Sushant Singh Rajput turns out to be incomparable with Mumma Amrita as she debuted with hit actor of the era Sunny Doel.

As per the reports, Saif Ali Khan has now actively taken the charge of daughter Sara Ali Khan’s Bollywood career as the newcomer has been facing unending issues with regard to her debut film.

Amrita got married at the early stage of her career and her marriage was great newsworthy as she married to 12 years younger actor Saif Ali Khan in 1991. Saif Ali Khan, the son of former Indian test cricket captain Mansoor Ali Khan Pataudi, the ninth Nawab of Pataudi and actress Sharmila Tagore. Singh converted to Islam before marriage.

On the other hand, Daughter Sara Ali Khan was born in 1993 and graduated from College Columbia University, New York, officially there are no rumours about Sara Ali Khan’s personal life and relationship status

Meanwhile, Sara is busy with her upcoming movie Kedarnath opposite Sushant Singh Rajput and Simmba which will release in the same month. While Kedarnath will hit the screens on 7th December, Simmba will release on 28th December.