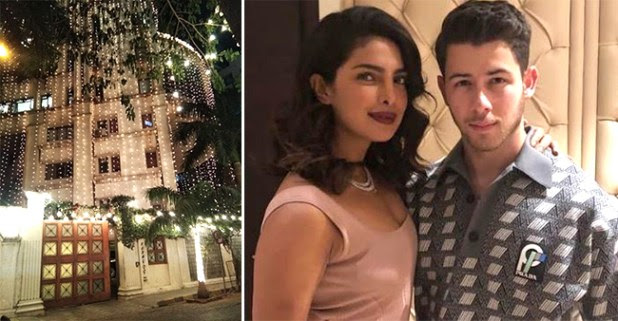 The most awaited wedding of the year is just around the corner. The Quantico actress, Priyanka Chopra, and the famous singer Nick Jonas are all to tie the knot next week. And like all Nickyanka fans, we are eagerly waiting for their wedding day. The power couple made their relationship official in August after dating for a few months. They finally got engaged in their Roka Ceremony in  August at Priyanka’s Mumbai’s residence.

The couple has not confirmed the dates or any other details of their wedding. But is believed that the wedding festivities will begin from November 28 and lasts until December 3. With just a week left for it, Priyanka’s Mumbai residence is all decked up with lights. The pictures and videos are taking rounds are breaking the internet. In the video, Priyanka’s house can be seen decorated with golden fairy light.

Recently, Nick Jonas landed to India for the upcoming wedding. Their wedding preparations are on a full swing. It is believed that their destination wedding is going to take place in Jodhpur at Umaid Bhawan in Jodhpur.

Meanwhile, Priyanka is busy with the schedule of her upcoming movie The Sky Is Pink. The movie is directed by Shonali Bose. Along with Priyanka, the movie features Farhan Akhtar and Zaira Wasim. The movie is slated to release in 2019.

Well, we are all geared to up to know more about Nickyanka’s wedding festivities. According to some reports, it is been said that several prominent Bollywood, as well as Hollywood actors, are going to attend their wedding. Now with a lot of excitement we just can’t wait to know some more details about the special day.