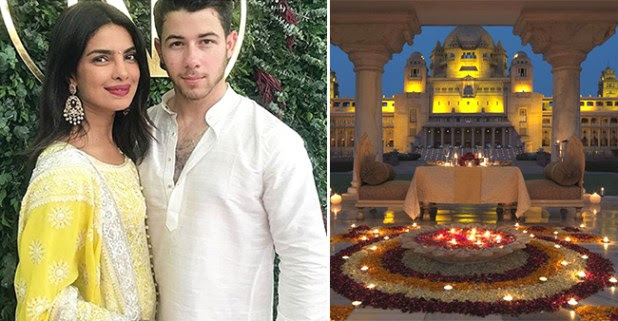 Priyanka Chopra is going to have a literally Princess-like wedding at the Taj Umaid Bhawan Palace in Jodhpur, India. After attending this year’s most talked royal wedding of Meghan Markle and Prince Harry, the Quantico star will walk down the aisle with Nick Jonas and the wedding festivities will take place from November 30 to December 2, a source who knows the plans tells BAZAAR.com.

Taj Umaid Bhawan Palace belongs to the former royal family of Jodhpur and is the sixth largest private residence in the world. It is stretched across 26 acres of land (including 15 acres of gardens), the desert sandstone estate sits on the highest point of the city, Chittar Hill.

Well, our international star is a Daddy’s Lil Girl and her mom is making sure she will have a wedding like one!

Talking about the Palace, it has 347 rooms, which includes a throne chamber (it is a palace after all), a museum, several banquet halls, ballrooms, a library, an indoor swimming pool, and a spa. For the sports-loving person, there are four tennis courts on the grounds and also two marble squash courts [just like any royals]. The palace is said to be built in between 1928 and 1943 but revamps by Taj Hotels, who has been managing the luxurious venue since 2005.

Well, if the venue is this royal, Priyanka and Nick are going to have an epic wedding and reception. Although, the couple is making headlines with the pre-wedding celebrations and social media have all the pictures, be it their Roka or Engagement, PeeCee’s Breakfast at Tiffany’s-inspired bridal shower at the Blue Box Cafe and the bride-to-be and her bridesmaids have a gala time at her bachelorette party.

The couple met in Met Gala 2017 and since then their bond is strong and we also we the same for them!