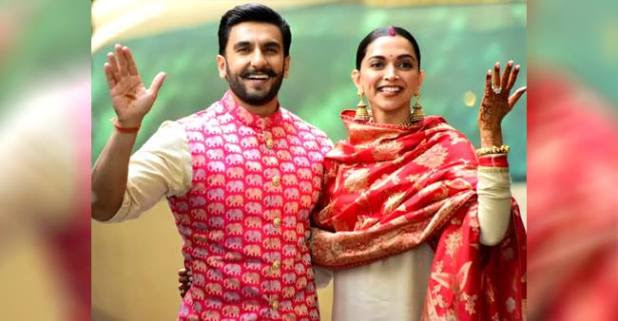 The newlyweds Ranveer and Deepika are back in India and to welcome the couple, myriads of their fans went to get a glimpse of them. While in between such a huge crowd Ranveer escorted his wife and safely made their way to the car. Both of them looked mesmerizing in their first look after the wedding as they garbed in white and red, complimenting each other the couple finally landed their hometown. Later to that, the couple at Ranveer’s residence came out and thanked all their fans for such warm wishes and blessings.

Ranveer and Deepika tied the knot at Lake Como in Italy on November 14 and 15. Following their wedding in two different traditions, as per Konkani and Sindhi rituals. Their blissful matrimony made all their fans go maniac, keeping it a much more confidential one, but within such secrecy, their wedding came into trouble as some things went wrong while following the ceremony claimed by an Italian Sikh organization.

According to the reports of Times Of India, allegedly it is said that Ranveer and Deepika’s Anand Karaj ceremony has not properly followed the Sikh code of conduct as the Akal Takht strictly prohibits taking Guru Granth Sahib to a place other than Gurudwara.

The president of Italian Sikh organization has taken up this matter to a higher level to Akal Takht Jathedar to seek help for further action on the same. Once the complaint will be registered Akal has given a green signal and will take the matter to five high priests.

Meanwhile, fans are now waiting for their jamboree reception, with three back to back parties, one being held on 21st of November at Bengaluru, wherein other two will be held on November 28 and December 1 at Grand Hyatt Mumbai.