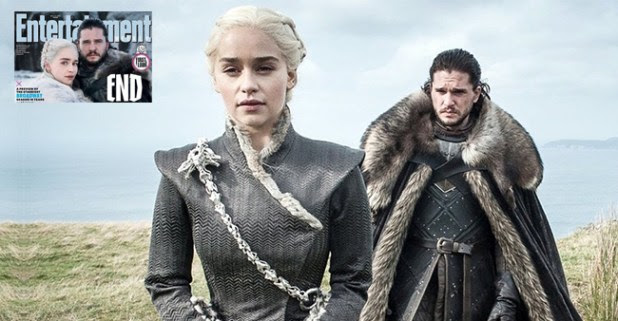 On Friday, Games of Thrones’ first look was unveiled for the 8th season. The famous Hollywood show starring Kit Harington and Emilia Clarke are all set to preview the eighth and final season. The last season has created a lot of eagerness among the fans.

The viewers are predicting that the crucial characters will pass away before the show comes to an end. In the first look of Games and Thrones Season 8 Kit Harington aka Jon Snow, the actor is seen along with Emilia Clarke aka Daenerys. The actor revealed to Entertainment Weekly that the makers spend five days on perfecting shots, which we were previously wrapped up in a one-day shoot.

He said, “It’s relentless; scenes that would have been a one-day shoot for five years ago are now a five-day shoot. They want to get it right, they want to shoot everything every single way so they have options.”

Emilia Clarke further added, “Camera checks take longer, costumes are a bit better, hair and makeup a bit sharper-every choice, every conversation, every attitude, has this air of ‘this is it’. Everything feels more intense.”

According to the magazine, “Season 8 opens at Winterfell with an episode that contains plenty callbacks to the show’s pilot. Instead of King Robert’s procession arriving, it’s Daenerys and her army. What follows is a thrilling and tense intermingling of characters-some of whom have never previously met, many who have messy histories- as they all prepare to face the inevitable invasion of the Amry.”

Speaking on to it the co-executive producer Bryan Cogman said, “It’s all about all of these disparate characters coming together to face a common enemy, dealing with their past, and defining the person they want to be.”

The beginning of the season is expected to be thrilling and adventurous. We all are really much awaited for the trailer. The final season for Games of Thrones arrives in 2019 with a new enthralling look.