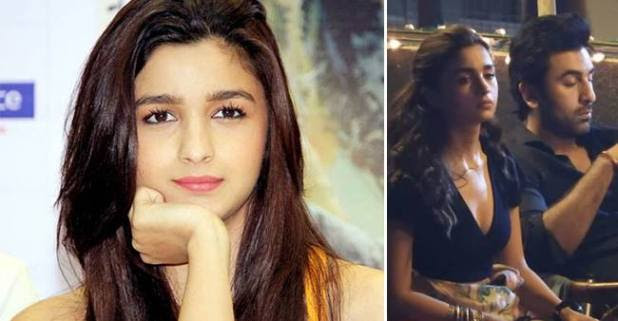 The loving couple Alia Bhatt and Ranbir Kapoor have always snapped in a delightful way. And no doubt we love this lovey-dovey couple of the tinsel world, in spite of not sharing the screen in cinema as an on-screen couple, their social media pictures have already caught attention and proved their hidden love publically.

Meanwhile, we know that the couple is working for the movie Brahmastra directed by Ayan Mukerji. It also stars Amitabh Bachchan, Mouni Roy, Nagarajan, and Dimple Kapadia and is produced by Karan Johar. Well, today we are not discussing the movie, instead, we have something more sneaky in our bag. Yes…directly from the sets, some pry pictures got public, these latest pictures from the sets of their upcoming film are revealing something really surprising going on between the lovebirds Alia and Ranbir.

It’s clearly seen that Alia is unhappy, while Ranbir instead of accompanying her, is busy on his phone, well it’s truly said, “Pictures speaks a thousand words” and Alia’s upset eyes too. Ranbir is acting a true phub while chubby and cute Alia seems upset in the pictures. We don’t the inside story but there must be some reason behind this situation. Well, we can just say might be, it’s one of those ‘caught in the moment’ but is that expression on Alia’s face is due to Ranbir who seems phubbing.

We have some more glimpse of the photos from the sets, take a look…

The film made in a budget of 250 crores helmed and written by Ayan Mukerji, Brahmastra is currently been shot in Mumbai. Also features Amitabh Bachchan, Mouni Roy, Nagarjuna, and Dimple Kapadia, the film backs a fairytale love story with a supernatural twist and turns. Initially, the movie was slated to release on 15th August 2019 but now will hit the silver screens in Christmas 2019. Stay tuned to get more scoops about the same.