2.0 And Zero: Not The Movies, But The Trailers Are All Set To Clash, Let’s See Who Wins 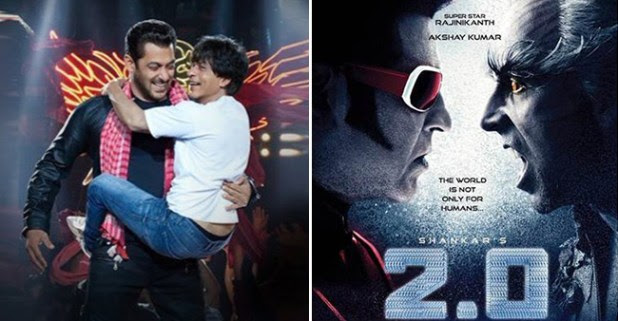 Shah Rukh’s Zero and Rajnikanth-Akshay Kumar’s 2.0 are the most awaited films of 2018. Both of the movies are considered the most fascinating and expensive movies ever made.

The release dates for these exciting trailers of Zero and 2.0 are set on 2nd and 3rd November. Earlier, the teaser of both the movies has achieved a lot of positive response and appreciation on all the social media platforms. The trailers for both the movies are going to clash as there is the only difference of a day between them. Both the movies have a lot of similarities like both features big actors, have made on a high budget and are heavily made on VFX.

2.0 has an astonishing budget of 600 crores. The movie is a sequel to Robot which released in 2010. It is a Shankar directorial, in which Rajnikanth will portray both as Dr. Vaseegaran, the scientist Chitty, the robot. The movie also stars Akshay Kumar, who is playing an adversary role of a bad scientist Dr. Richard. Along with them, Amy Jackson will also be seen in the movie. The music of the movie is being composed by A.R Rahman.

Coming on to Zero, the movie stars Shah Rukh Khan, Anushka Sharma, and Katrina Kaif. Today, Shah Rukh unveiled two posters of the movie. Shah Rukh is playing a dwarf character. Whereas Katrina plays the role of an actress who drinks a lot and Anushka is seen as a wheelchair-bound. This movie is a reunion of  Jab Tak Hai Jaan trio after 6 long years. The two of the posters are receiving mixed reaction of the viewers. The film is being directed by Anand L. Rai.

Isn’t she the warmest and kindest! My friend…Thanks for bringing Zero to life! pic.twitter.com/I0HKPiznAH

Well, we think that Both the movies are going to give their best. As both biggies, Shah Rukh and Rajnikanth makes us comfortable in all of their movies. It’s amazing how technology can add to telling a story of both 2.0 and Zero. The films are going to turn out wonderfully. And we are looking forward as soon as they are ready.

Let’s wait for the trailers and check out which one is going to win more hearts.