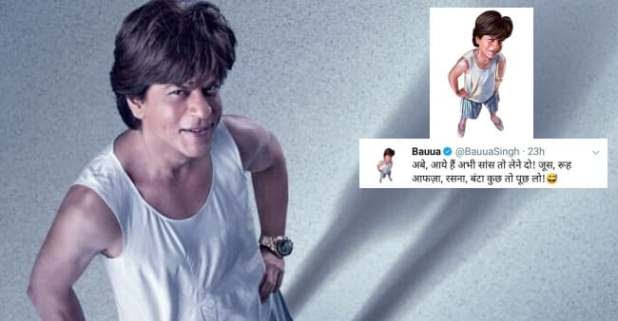 Shah Rukh Khan is the most versatile actor of the Hindi film industry, for example, let’s take an example of Dil To Pagal Hai or Kuch Kuch Hota Hai which are undoubtedly the most wonderful movies. No matter how hard anybody imitates SRK, but nobody can touch his perfection level be it of crying or romancing.

Soon SRK will be next seen in the most anticipated movie of this year which is Aanand L Rai’s Zero in which he will be seen playing the role of a dwarf. This movie also stars Katrina Kaif and Anushka Sharma in pivotal roles. The first looks of the trio have been already released and they left us all excited about the movie.

This left all the netizens in doubt as well as excitement and started tweeting about the same. Have a look at the Twitterati’s reaction…

Alongside SRK, Salman Khan will make a guest appearance in the movie doing a dance number. The film will also have special appearances from the late legend, Sridevi, Rani Mukerji, Kajol, Alia Bhatt, and Deepika Padukone.

Post the first teaser, the makers of the movie revealed the second teaser of Zero on Eid in which Salman Khan along with Shah Rukh can be seen dancing together and it’s a treat for Bhai’s fans.