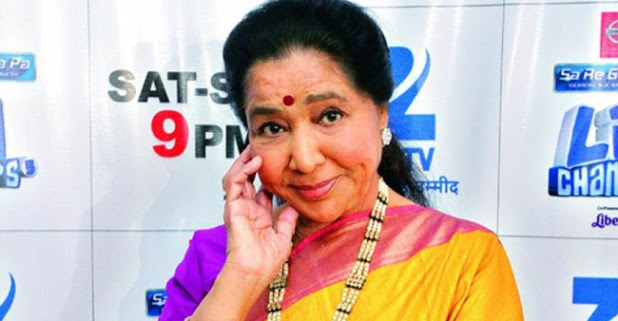 Veteran Singer Asha Bhosle has made a comeback after a hiatus of more than two decades. Yes, she has recorded for a Bengali song for the occasion of Durga Puja. Asha has recorded over 66 Bengali Puja song in which single and duet are included for late composer-husband R.D. Burman. Now, the living legend comes up with next release “Ebar Pujoy Elaam Phire”. This song is released on 8 October which is a part of “Pujoy Asha” album. Playback singer Amit Kumar has also given his voice to the album with “Surey Tumi”.

Shiladitya Chaudhury, one of the composers of the album, told IANS, “Working with Ashaji is a dream come true. Almost after 23 years, she has lent her voice to a Bengali Pujo song. It took time to convince her as she had stopped singing Bengali Puja songs after Pancham da’s (R.D. Burman) left”.

Chaudhury also admitted that the Bengali Puja songs are very close to Asha’s heart. “Aamar Khatar Patay” Puja song which was released in 1963 was Asha’s song, which was composed by Manna Dey. It was 50 years back in 1968 when she sang her first puja song that was set to tune by Burman. “Eyi Edike Esho” and “Jabo Ki Jabona” were penned by Gouriprasanna Majumdar. There were a few blockbusters like “Durge Durge Durgotinashini” and “Moyna Bolo Tumi Krishno Raadhe”. The song “Ebar Pujoy Elaam Phire” was recorded by Asha Ji exactly a week after she completed 85 years.

“While recording the song she recalled her days with Pancham da. She was happy that even after so many years people want to hear her Puja song,” said Chaudhury.

In Bollywood, Asha Ji has given many hits. She made her Hindi film debut when she sang the song “Saawan Aaya” for Hansraj Behl’s Chunariya (1948). Her first solo Hindi film song was for the movie Raat Ki Raani (1949).