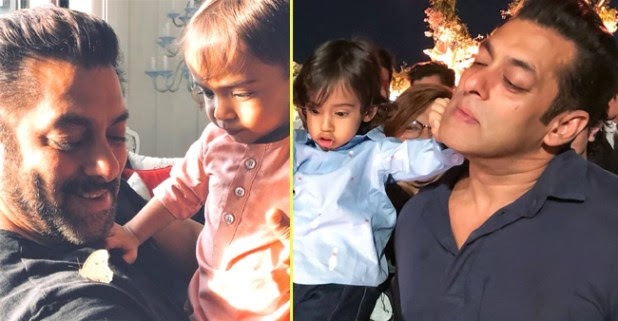 It is well-known that Salman Khan loves his nephew Ahil Sharma more than his life. Ahil is his sister’s Arpita Khan and Aayush Sharma baby boy. Arpita Khan always left us in awe whenever she shared some of the moments of Mamu with Ahil and no doubt they are damn adorable. The latest picture of Salman and Ahil is doing rounds on the social media, shared by Arpita herself.

Have a look at the picture:

We can’t figure out who is more priceless in this cutest picture of today. Is it Ahil’s candid shot or Salman’s expression of handling the baby boy?

Well, you all tell us in the comment section till we wait for Salman’s reaction to this picture who seems already a father to Ahil just like he did care Arpita…

Many times Arpita shared pictures and videos of these two kids, one with heart and one is still. Whenever Salman spends his quality time with this little munchkin, it is mandatory to post their moments online which made everyone’s day.

Earlier in September, Salman shared a video of Arpita where she was seen carrying Ahil which made Salman emotional. He wrote along with the video, “How time flies. its Arpita now carrying Ahil at the show. God bless.”

Recently, Ahil’s dad made his debut in the film industry with Loveyatri alongside Warima Hussain which was produced by Salman Khan.

Earlier, Aayush revealed that only Ahil is allowed wake Salman from sleep and nobody else. He exclaimed, “With Salman bhai, Arpita has been more like his daughter than a sister. He’s always taking care of her like a daughter. Now Arpita and his son is even special. It’s not just for Salman bhai, but the whole family. Salman bhai also gets a little break with Ahil. If Ahil wants bhai to get up, he’ll pull him and bhai doesn’t say anything to him. But we’re not allowed. He gets away with everything. Ahil doesn’t sleep before 4 am. He likes to party with us. Bhai even takes Ahil with him to shoot.”

Talking about Salman’s work front, he is busy shooting for his upcoming flick BHARAT alongside Katrina Kaif. The film’s director is Ali Abbas Zafar which also stars Sunil Grover and Disha Patani and Nora Fatehi. BHARAT is slated for the release of next years’ EID.