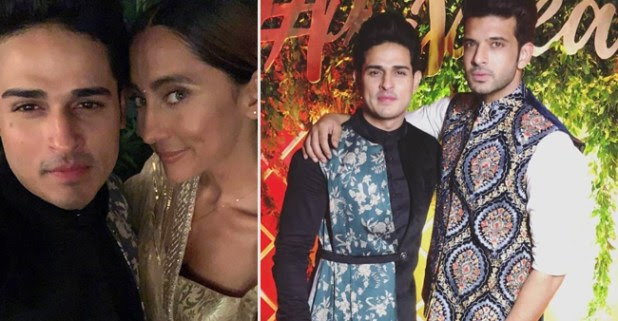 Prince Narula and Yuvika Chaudhary’s sangeet was an enjoyable Punjabi bash. The dress code looked to be golden as Yuvika put on a shiny dull gold lehenga choli along with gajra in her curls.

The besties shake their legs on Bollywood hits and popular Punjabi songs such as Bolo Tara Ra Ra. In one of the video recordings, we can witness Priyank coming down on his knees to Anusha Dandekar, who was looking gorgeous in a shimmery lehenga. Priyank proposed Anusha Dandekar with a rose for what we predict is a dance.

Standing alongside Anusha Dandekar was her beau Karan Kundrra. We can see that Karan kicks Priyank. Of course, it is all pleasant.

For those who do not know, Karan Kundrra and Anusha Dandekar have been in a relationship for quite a few years now. In the year 2016, Karan and Anusha came out in the open and accredited the sweetheart and admiration they have for one another.

Karan had then stated, “We didn’t wake up one morning and declare our love for each other on social media. It was a gradual process. People call us up and tell us we give them #couplegoals. Apparently, we are getting many couples into trouble as they want to be like us. Be the truth is, we don’t pose for a pic. It’s just natural. Everybody should just chill out”.

He also added, “This is my first relationship which is sorted”.

At the beginning of 2018, Anusha recevied backlash on the social platform for coming in between Karan and his ex-lady love, Kritika Kamra that profoundly affected her.

While talking on the same, Karan told media people, “No…not me. I don’t really care but people do. We were seen together on screen from 2009 to 2011 but it seems like their life’s purpose is to see us together. We as individuals chose not to be together from 2010. Arjun and Aarohi were characters, not us in real life. Stop being the administrators of our lives. It has spoiled my family life”.